skip to main content
Return to Fordham University
You are at:Home»Inside Fordham»Coming Up Next: Law Student Goes from Voiceovers to Litigations 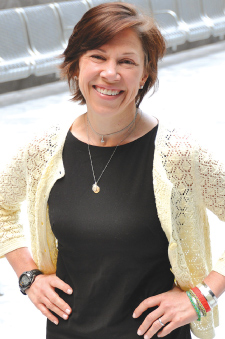 Last February, Sally Winters participated in a panel discussion at Fordham School of Law on what makes a successful evening division law student. The panelists, of which she was one, received the question: “When did you know that it was time to quit your day job?”

One by one, they discussed their transitions between careers.

“And then they got to me, and I answered, ‘I don’t know,’” said Winters, who, in addition to graduating from Fordham Law, has built a career as an actress and voiceover performer. “Because I haven’t done it yet.”

Although she had gone to college with the intent of becoming a lawyer, she had also harbored a love for the theater. Her plan to take the LSAT and apply to law school, however, gave way to a job offer doing summer stock. She thought she might take the LSAT the following February, but was again delayed when she was hired into another show after summer stock ended.

“Every time I’d say that I was going to take the LSAT in the next seating, I would be hired for something,” she said. “And it just kept going until I finally realized that I had a great career going and didn’t want to stop.”

She continued in musical theater and also started working as a voiceover performer doing television and radio commercials, network promos, and political ads—all of which she continues to do full time.

“I did my first voiceover in 1996 and haven’t stopped working since,” she said. “In 15 years, I haven’t had a vacation where I didn’t have to be near a recording studio.”

In 2000, the Screen Actors Guild and the American Federation of Television and Radio Artists (now SAG-AFTRA)— of which Winters is a member—launched a six-month strike. The dire situation, she said, ultimately left many performers without work. The strike eventually resolved, but the experience disturbed Winters so deeply that she decided to take matters into her own hands.

“I’m not a person who sits back and complains. If I see a problem, I get involved,” she said. “So I did. I ran for a seat on the board and won.”

As a board member, Winters worked on legal matters, including contract negotiations. The work brought her back to her undergraduate pre-law days. Again, she contemplated taking the LSAT and picking up where she had left off.

“I remember one day we were in negotiations on a big contract, and I got a call to do a last-minute audition. And I decided not to go, because I wanted to stay in the room and finish the negotiation,” she said. “That was the minute I knew my priorities had started to shift.”

Eventually, the board’s executive leadership approached her and offered to sponsor her study at Cornell University’s program in industrial and labor relations. But they were too late—by then, Winters had already decided to return to law school, and had set her heart on Fordham.

At Fordham, Winters has thrived. She joined the Dispute Resolution Society’s competitive team, participated in the school’s Federal Litigation Clinic, and spent last summer working at a large New York law firm, where she is planning to continue on, following graduation, in its commercial real estate department. In addition, she was selected by the school as one of four Evening Students of the Year.

“One of the great things about Fordham is that there is a lot of support for working students in the evening program,” she said. “It’s what makes Fordham special. I had to keep working to support my family, so it’s the only place where I could’ve gone to law school.”

Her success as a law student has taught her the difficult but important art of knowing one’s own limitations. As a result, she accepts that her longtime career as a performer may change, she said.

But accepting her limitations, she said, doesn’t mean limiting her enthusiasm.
“You have to want it,” she said. “I have the most success when I stay open to possibilities and take advantage of opportunities presented to me. See an open door? Walk through it!”