With the college ranking season in full swing, Fordham University is hot. 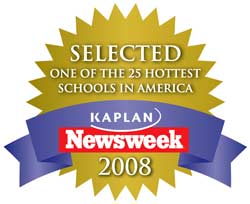 In fact, Fordham is one of the hottest schools in the nation, according to the editors of Kaplan/Newsweek’s How to Get Into Collegeguidebook, who picked the University among its “25 Hottest Schools in America.”

“We are, of course, pleased that Fordham’s reputation is catching up with its accomplishments,” said Joseph M. McShane, S.J., president of Fordham. “The designations as one of the nation’s top universities is a recognition of all the University offers its students: intellectual rigor; unparalleled learning and career opportunities in New York City; and the Jesuit concern for the whole person. Clearly, Fordham is an institution on the move and it’s wonderful that others around the country are recognizing that fact.”

The 2008 edition of the Kaplan/Newsweek guide, which was excerpted in the Aug. 20 double issue ofNewsweek, described Fordham’s ability to attract a national semifinalist in the Intel Science Talent Search, Amanda Fiscina.

“She was impressed,” according the guide, “not just by the academics, but the school’s commitment ‘to prepare us as people with strong morals, values and ethical behavioral standards.’” The guide also highlighted Fordham’s small undergraduate student body and class size.

The guide is different from some of other ratings in that it doesn’t rank schools. Instead, it briefly describes each of the 25 colleges and universities.

In the U.S. News rankings, Fordham achieved one of its highest rankings ever among the 263 top-tier national universities. In the last four years, Fordham has moved up 17 places, from 84th to 67th. Fordham ranked fourth among Catholic universities.

Fordham tied with Clemson University and Miami University of Ohio for the 67th spot. The magazine lists four tiers in the national universities category. It defines national universities as those that offer a wide range of undergraduate majors as well as master’s and doctoral degrees. The category, which includes 164 public institutions and 98 private ones, is based on those developed by the Carnegie Foundation for the Advancement of Teaching.

Among the data for Fordham was an 89 percent retention rate for freshmen. In addition, 49 percent of the University’s classes had 20 students or fewer, and Fordham had the distinction of being one of just two schools in the top tier that had no more than one percent of its classes larger than 50 students.

U.S. News began publishing rankings in 1983 and they have emerged as among the most influential such listings in what has become an increasingly crowded publishing niche.