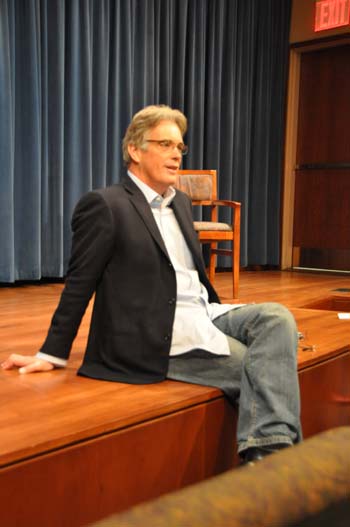 Students question John Roberts on his war reporting, which he did in 2003 while embedded with a Marine battalion in Iraq.
Photo by Patrick Verel

The media landscape has changed dramatically in the last few years, but CNN’s John Roberts told Fordham students at the Rose Hill campus that there will always be a need for information sources like cable news.

Speaking on April 14 at the Flom Auditorium in the William D. Walsh Family Library, Roberts, a co-anchor of CNN’s American Morning, mixed stories about his career with a question-and-answer session with students about how to succeed in an ever-changing broadcast environment.

“There are fewer outlets out there than there used to be, so what you really need to do if you want to get a job in this business is you have to shine. The way that you shine is you have to be enthusiastic, you have to be dedicated to what you’re doing, and you have to be humble when you’re coming up through the business,” he said. “There’s an old saying—be nice to everybody on the way up, because you may see them on the way back down.”

Since he started in radio in his native Canada, Roberts was asked what it was like to make the transition to television. Having worked as the first on-air personality for Canada’s Much Music channel when it launched in 1984, he then made the transition from entertainment to news reporting. Neither change was that difficult, he said, because regardless of the medium, the strongest writers always make the best correspondents.

“You should write a script that would be visual even if you didn’t have accompanying video. The way to do that is to go back and listen to the World War II broadcasts of Edward R. Murrow, who was there in London during the Blitz, and all he had was a microphone,” Roberts said.

“A lot of times he was on the rooftop of a building, and he was just looking around him, describing what was going on in London as the bombs were falling down. He did it in these amazing word pictures that actually took you there.”

Many the students’ questions revolved around Roberts’ war reporting, which he did in 2003 while embedded with a Marine battalion in Iraq, and again last year during Israel’s war in Lebanon. What shook him up more than anything else was the death of fellow journalist David Bloom, who he had competed against as a television reporter in Miami in 1989.

“It just hit me like nothing else that I had seen, because Bloom was one of those guys that you thought was untouchable. He just had this golden light shining on him at NBC, and you could tell he was going to be a superstar,” he said. “I thought at that moment, despite everything that I had seen and everything I had gone through, I thought, ‘If David Bloom can die, none of us are going home.’”

In keeping with a career that has seen assignments from the White House to Kashmir, Roberts said if he were able to start his own network, he would probably model it on CNN International.

“I have a real interest in international news, and CNN-I does a lot more of that than CNN domestic does. I’d probably never put a car chase on the air,” he said. “I would make sure that if we were going to cover a story like the Octomom, that we didn’t just talk about it in terms of, ‘Oh my God, can you believe this woman’s got eight kids?’ and all the criticisms.”