skip to main content
Return to Fordham University
You are at:Home»Faculty Profiles»Clocks and Trees—Surreal Results on Decision Making 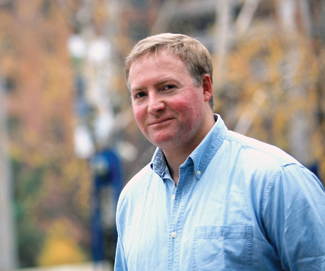 Spend enough time with an economist and the word “elegant” is sure to pop up to describe a mathematical equation.

For his latest paper, published by the journal Econometrica last year, James said a tremendous effort was made “nailing down [the design of the experiments], and cutting down the various angles before we let people anywhere near it.”

The resulting article, “Clocks and Trees: Isomorphic Dutch Auctions and Centipede Games,” brings together two different strands of decision-making in game theory, and in auctions. The paper was co-authored with James C. Cox, Ph.D., the Noah Langdale, Jr. Chair of Economics at Georgia State University.

Game theory is the study of strategic interaction as developed mathematically.

James and Cox decided to study two game strategies: the Dutch auction and the centipede game. The Dutch auction is a naturally occurring auction: it has its roots in real-world trading. But the centipede is considered synthetic because it was initially developed purely as a conceptual paradox to challenge game theorists.

In the Dutch auction, the desired object is given a price well above its perceived value. A descending clock, like a stopwatch, is started. The price goes down in a linear fashion corresponding to the dwindling seconds: $98, $97, $96, etc. The winner stops the clock earlier (and at a higher price) than the others.

The centipede game is not unlike the game of hot potato, but each time the potato gets passed on to the next player, it grows in value. The person who decides not to pass it on is the winner.

“You have to move it around for it to gain value, but ultimately you want to hold on to it,” said James.

The accumulation of the pot for the centipede game is often geometric—the pot doubles in value as it gets passed on. For example, the first player’s potato is worth $2, the next player’s is worth $4, the next is worth $8, then $16, $32, $64, etc.

Over the years researchers have come to certain conclusions about participant behaviors in each setting. Cox and economists Bruce Roberson and Vernon Smith pioneered an explanation of the Dutch auction that concluded, in part, that subjects dropped out of the game too soon due to risk aversion.

Other economists researching the centipede game concluded that participants stayed in the game too long, due to an altruistic belief that there was enough good will among participants that the object might eventually find its way back into their possession.

“You have centipede literature on one track and Dutch auction literature on another track, and each track [has]its own mythology,” said James. “These two fields had been living these parallel lives for about 30 years and no one had put the two together.”

James and Cox challenged the economists’ conclusions. First, they made changes to both games that didn’t unduly change their character, or their equilibrium predictions, “nesting” the Dutch auction and centipede game into a more general “meta-game,” and making the games slightly more like each other.

As the centipede is a synthetic game formed purely for the purpose of game theorists, participants know everything about each other’s value structure. However, Cox and James no longer allowed bidders to know each other’s values, thus making it more like a Dutch auction.

After nearly 600 subjects participated, the economists found that with the new presentation, Dutch auction players played longer and paid lower prices when using the tree visuals, while centipede players actually tapped out at the earliest opportunity when using the clock visuals.

“By smashing the two games together we were able to eliminate a lot of theories we now know probably aren’t true,” said James. “For example, it’s probably not risk aversion in the Dutch auction and it’s probably not altruism that drives the centipede game.

“The behavior isn’t coming from people’s preferences, because we can turn this stuff on or off like a light switch, based on how we present the game to them.”
James was careful not to insinuate that his paper’s conclusion means that 30 years’ worth of economists’ research goes down the drain.

But the authors are expecting challenges.

“You have a lot of really smart people, Nobel Prize winners on both sides, writing on these two games, but when the findings are put together they basically annihilate each other,” he said.

Practically speaking, James said that there are any number of ways for people to come to and execute a decision, and the Dutch auction and centipede game create a benchmark for comparison.

“Whether it’s the clock version or tree version, the games trigger very different reactions if they’re laid out differently, but people should recognize that it’s the same thing, its just being presented differently,” said James. “Critical thinking sounds too much like school work, so I’d describe it as situational awareness.”

“The way I’d explain this to the man on the street is: pay attention to your surroundings, keep your eyes open.”