skip to main content
Return to Fordham University
You are at:Home»Commencement»Class of 2017 Urged to Face Unsettling Times With a Merciful Heart

Under slate gray skies, Fordham’s Class of 2017 was challenged by a clear call to embrace love, charity, and mercy in tackling head-on the problems of a turbulent, unpredictable, and unsettling world.

“Where we see problems, it is best to see opportunities. People need experiences of salvation because we live in a turbulent world,” said his Eminence Óscar Andrés Cardinal Rodríguez Maradiaga, S.D.B., archbishop of Tegucigalpa, Honduras, delivering the keynote address (full remarks here) to an estimated crowd of 20,000 gathered at the Rose Hill campus for the University’s 172nd commencement.

“You have a whole world to discover. But you also face new risks: The one who’s paralyzed in front of risks loses opportunities.” 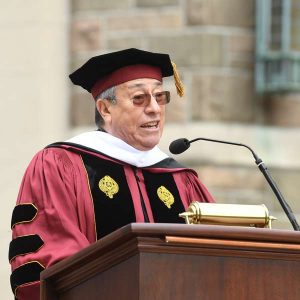 Cardinal Rodríguez Maradiaga, a key adviser to Pope Francis and a robust Catholic voice for addressing global poverty and social injustice, was awarded an honorary doctorate of humane letters during the ceremony on Edwards Parade. He encouraged the 5,077 graduates to “be present in public debate, in all the areas where humanity is at issue,” and to make God’s mercy and tenderness visible for every creature.

To be spiritual is to live life according to the Holy Spirit, he said, through “transcendent humanism,” a seemingly paradoxical tradition of Christian mysticism that is centered on both the search for God through Jesus, and on human experience in the search for fraternal love.

“Transcendental humanism acknowledges that the experience of God is inseparable from commitment to all that is human,” he said, including “the preferential love for the poor and the suffering.” He encouraged the graduates, therefore, to face today’s fragmented, polarized society “committed to work with courage and heroism for the cause of the human being.”

“Before a culture of violence and death this is what we propose: The culture of good.”

A Call to Live Well 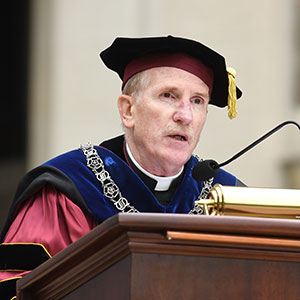 In his address to those graduating in the University’s Dodransbicentennial year, Joseph M. McShane, S.J., president of Fordham, sounded a cautionary note, acknowledging that the world today is difficult, discouraging, challenging, and often destructive. As Fordham students and New Yorkers “by birth or by adoption,” the Class of 2017 has been personally affected by current events.

“You learned that when a rock is thrown in the Gaza Strip, a heart is broken in a neighborhood in Brooklyn, and when a bomb goes off on the London tube, we shudder on the Number 4 line at Grand Central,” he said.

“When children starve in a refugee camp anywhere in the world, the streets of Manhattan stream with tearful demonstrators, and when there is political unrest in Korea, the news unsettles your friends whose families live in Korean communities all over the city.”

The key, he said, is to “embrace the motto ‘living well is the best revenge’ by becoming society’s standouts, guides, and [society’s] conscience.” He told the graduates to live lives “not marked by conspicuous consumption but conspicuous compassion.”

“Remember that the principles in your heart are worth nothing if they are locked away in your hearts,” he said. “Set them loose and let them direct your every action. You will transform the world with your gritty New York generosity; your hard won, discerning wisdom; and your daring compassion.”

In addition to the cardinal, this year’s recipients of honorary degrees include:

Michael Dowling, the president and CEO of Northwell Health;

Jane Iannucelli, S.C., president of the order of the Sisters of Charity;