skip to main content
Return to Fordham University
You are at:Home»Inside Fordham»Class of 2012 Makes Fordham, New York Its Campus 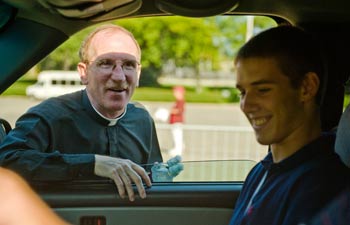 ather McShane meets an incoming freshman and his family with a smile and a bottle of water on Move-In Day.
Photo by Ryan Brenizer

With cloudless skies overhead and a feeling of excitement on the ground, Fordham’s Class of 2012 arrived at its new home on Sunday, Aug. 31.

For many, their first campus encounter was Joseph M. McShane, S.J., president of Fordham. The energetic Jesuit handed out bottles of water and friendly greetings to arriving students and their families from all over the state, nation and world.

“When you get to the dorms, don’t lift a finger,” Father McShane instructed the family of freshman Mitch Smith, a National Merit Scholar from Dallas. “Just enjoy the day. Our students will carry everything.

“And thank you for choosing Fordham—you’re going to love it.”

This year marked the 17th consecutive cycle in which applications to Fordham have increased, with 23,794 students seeking admission—an 8 percent jump over the previous year. Smith is one of 1,868 entering freshmen, up from 1,767 in 2007.

“We’re very excited about this class,” said John W. Buckley, associate vice president for undergraduate enrollment. “It was a competitive year to gain admission to the University and a challenging year for colleges recruiting top students, but this class is academically stronger and more diverse than a year ago.”

Minority enrollment climbed to 31 percent, up from 26 percent in last year’s freshman class. Specifically, Asian students rose from 9 to 11 percent, and Hispanics, who comprise Fordham’s largest minority group, increased from 12 to 15 percent.

The average SAT score for this year’s class rose to 1228, up slightly from 1224 last year.

At the Lincoln Center campus, Fordham upperclassmen descended upon cars that pulled up to McMahon Hall. Volunteers serenaded their incoming classmates and helped them get settled in their rooms. Afterward, new students and their parents mingled at a reception on Robert Moses Plaza.

Vanessa Camacho, a Staten Island native who plans to major in international political economy, used the time to make new friends. She said she was familiar with Fordham from high school swimming competitions held at Rose Hill.

“I really like Fordham in the Bronx, and I remember thinking that it would be so amazing if it actually existed in Manhattan,” she said, “and lo and behold, it’s right here.”

Miguel Bantigue arrived from Manila, the Philippines, to study finance in the College of Business Administration.

“Fordham has a great combination of a beautiful campus and being close to the city,” Bantigue said. “Not only do you get Fordham’s business program, which ranks really high, but you get New York City. Here, it’s the best of both worlds.”

Pleasant surprise was the common sentiment registered by new students and their parents who moved into the Lincoln Center campus. Jakob Karr, who traveled from Windemere, Fla., for a bachelor of fine arts in dance, said he imagined that Move-In would be chaotic.

About 230 freshmen moved into the Lincoln Center campus, while 1,134 freshmen took up residence at Rose Hill. The numbers represented increases of 11 percent and 5 percent over 2007, respectively.

As cars packed to the hilt pulled up in front of Tierney Hall at Rose Hill, scores of upperclassmen in maroon t-shirts greeted the arriving students and their parents with cheers, applause and welcoming smiles. Members of the Fordham football, volleyball, water polo and track and field squads stood at the ready outside of Alumni North and South and Queens Court.

“I can’t believe this,” said Carol Kelley, mother of freshman Brian. “It really makes you feel at home. I’ve never been so impressed.”

Upperclassmen carted mini-fridges, modular furniture, cases of macaroni and cheese, televisions—and even a fireproof safe—into the dorms, enabling freshman students and their parents to check in with ease.

“The beauty of Opening Day is watching the students cheering the arrival of the incoming freshmen as they drive up to each residence hall,” said Michele Burris, associate vice president of student affairs.

Outside the McGinley Center, more than 100 people gathered in a welcome tent for commuter students. Luisa Gautreaux, a Bronx native, said the event made her feel like a part of Move-In Day even though she would live at home with her parents.

“Fordham is a 10-minute bus ride from my house,” she said. “I never thought I’d go here, but the University’s Higher Education Opportunity Program made it possible.”