skip to main content
Return to Fordham University
You are at:Home»Inside Fordham»CIA Official Measures Balance Between Liberty and Security 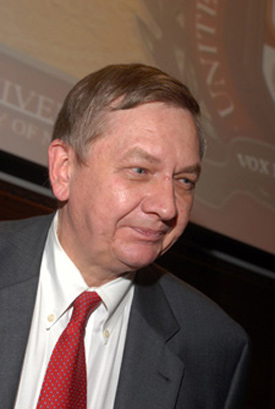 The Central Intelligence Agency must strike a balance between maintaining American values and protecting the country from terrorist threats, a high-ranking CIA official said at Fordham.

“If you’re a civil servant in any agency dealing with national security issues, you have to grapple with these conflicts,” said Michael Sulick, Ph.D., FCRH ’71, GSAS ’72, director of the CIA’s National Clandestine Service. “It’s not easy. You’re faced with defending the public trust and are often faced with difficult decisions that affect the public good. Sometimes there are merits on both sides.”

Sulick, on the Rose Hill campus to deliver the inaugural Lecture on Leadership and Government Service, sponsored by the United Student Government (USG), recapped his 30-year career in the CIA, which spanned the Cold War, the post-Cold War era and the war on terror.

“I am probably representative of the typical operations officer,” he said, demystifying the popular preconception of a government spy. “I do not drive a Jaguar or a Bentley with special gadgets. My watch does not have a laser or a microphone.”

Sulick joined the CIA in 1980, and has been stationed throughout the world. In 1991, he became the first U.S. official to enter a former Soviet republic, when he visited Lithuania shortly after the country declared its independence from the Soviet Union.

He resigned in 2004, but rejoined the CIA as head of the clandestine service three years later, in 2007. Today, Sulick oversees all foreign intelligence activities, including the CIA, the FBI’s foreign affairs department and the Defense Intelligence Agency.

“Our role is to provide policy makers with secret information about countries and groups that present security threats to the United States,” he said. “Our objectivity is critical to the mission. Information we get may influence policy. It may not also, but we don’t shape information. Clandestine Service presents this information just as we receive it.”

Throughout his March 25 lecture, Sulick stressed the CIA’s need to uphold the law while simultaneously protecting the American public.
“
We have to find some way to achieve that balance,” he said. “We have to find the common ground between maintaining our values and safeguarding Americans.”

While acknowledging in broad strokes the CIA’s “historical baggage,” Sulick said the CIA performs a valuable public service, especially after 9/11, when intelligence is now “more important than it was during the Cold War.”

“At the same time, in spite of all this, there is an enormous thrill when you’re out meeting a spy and he or she gives you that one piece of information that answers some critical question the United States government needs to know. I can’t think of any nobler public service than that, and I guess that’s why I’ve been doing it for three decades.”

Sulick followed his lecture with a lengthy question-and-answer session, although he prefaced it by saying he would not comment on any issue that might influence policy. Questions were submitted by Fordham students in advance and read aloud by USG members. When asked if the Obama administration’s ban on waterboarding has had serious consequences for the war against terror, Sulick answered in general terms.

“I don’t think we’ve suffered at all from an intelligence standpoint,” he said, “but I don’t want to talk about [it from]a legal, moral or ethical standpoint.”

Sulick stuck primarily to questions about the CIA as an organization, responding at length to inquiries about employment and careers, the sharing of intelligence and the changing demographic of the historically blue-blooded agency.

“Our director, Leon Panetta, wants to achieve a diversity rate of 30 percent,” he said. “And there’s a reason for it. Nowadays people walk around the streets of Riyadh, Islamabad, Karachi, Kabul, Baghdad. We’re looking for people who are diverse for a whole school of reasons, especially for operational reasons.”

In response to a submitted question from a GSAS doctoral student about the CIA’s definition of terrorism, Sulick invited to the dais Ray McGovern, FCRH ’69, a former CIA analyst and founder of Veteran Intelligence Professionals for Sanity, an organization critical of the CIA.

After a lengthy prologue, McGovern, who was not scheduled to speak, pointed out the disconnect between the Catholic faith and the CIA’s killing of innocents around the world in pursuit of terrorists. McGovern claimed that the CIA arbitrarily distinguishes between what he labeled “good terrorists and bad terrorists.”