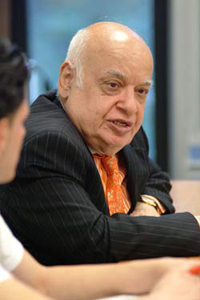 The chief of policy analysis for the Chinese Mission to the United Nations told a gathering of Fordham students and faculty that North Korea’s nuclear weapons test marks a significant change in world stability.

“The North Korean test is a turning point,” said Qi Qianjin, who was at Fordham’s Lincoln Center campus on Oct. 10 as part of a presentation sponsored by the Organizational Leadership Program. “We condemn it, and we [will]try to cooperate with other powers, like the U.S. This accident will influence Sino-U.S. relations [and]the stability and peace of the world community.”

Qi’s address was followed by a lecture by Parviz Morewedge, Ph.D., adjunct professor of philosophy at Fordham, on “Diplomacy and Conflict Resolution in the Age of Globalization.”

The world learned of the tests when the North Koreans issued a statement on Oct. 9 declaring that the country had “successfully conducted an underground nuclear test under secure conditions.”

Questioned on his use of the word “accident” to describe the nuclear test, Qi said that diplomats tended to choose their words carefully. “I don’t think it’s a crisis,” he said. “Diplomacy is still working.”

Qi’s speech on “Chinese Leadership and Foreign Policy” dealt with the rapid growth of China’s economy under its new political leadership, and the societal effect of such 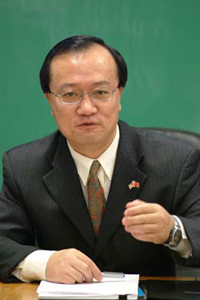 The Chinese mission’s chief policy analyst, Qi Qianjin, said that his nation “will be a winner” when it comes to globalization.

progress, including increased pollution and a widening economic gap between rich and poor.

“There are two sides to globalization, but we see China as a winner,” he said.

He also stressed a need for political reform, saying China will not be able to maintain economic growth without it.

Morewedge, meanwhile, picked up on Qi’s theme, defining China as one of the five most critical regions in modern international diplomacy—along with the Russian Federation, and Central Asia, India, Afghanistan and Islamic countries.

He cited statistics showing that there will soon be four billion Muslims, meaning that a majority of the world will be Muslim, Chinese, or both. “This is a reality we cannot forget,” he said.

Historical enmities, he added, may also shape the new century. “There are big wounds between Russia and the Central Asian countries, but [both]are very afraid of America.”

Another conference, “Leadership, Diplomacy and Conflict Resolution,” also sponsored by the Organizational Leadership Program, was held on Oct. 21 at Fordham’s Lincoln Center campus and looked at similar issues through the lens of international diplomacy. The event featured a roundtable discussion on diplomacy at the United Nations.