skip to main content
Return to Fordham University
You are at:Home»Faculty Profiles»Chemistry Professor Revises Past Experiments with New Technology 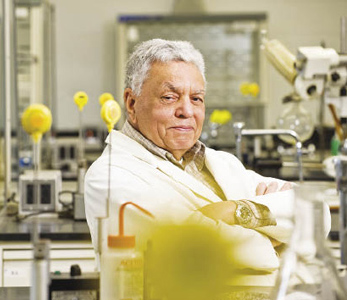 Research by Donald D. Clarke, Ph.D., shows that monosodium glutamate that is excluded from the brains of adults can pass through the blood-brain barriers of infants.
Photo by Jon Roemer

“What evidence do we have to prove this?”

According to Donald D. Clarke, Ph.D., professor of chemistry since 1962, this is a question often asked by students when studying textbook explanations of a standard lab experiment—the nitration of methyl benzoate.

While the textbooks indicate that the experiment will produce certain isomers in addition to the desired products of the procedure, students generally never get a chance to test whether what the textbooks say is true.

Instead, they commonly send the residue from their experiment—where these additional compounds are to be found—to waste disposal.

Clarke’s current interest is to update traditional experiments like this one with advanced technology that is available today in student labs.

Using the University’s nuclearmagnetic resonance (NMR) facility, Clarke is able to demonstrate to his students that the other isomers can be detected and measured.

NMR spectroscopy—Clarke’s “favorite tool”—is a research technique in which a sample is immersed in a strong magnetic field and hit with radio waves to identify the components of molecules. The outcome is referred to as a “spectrum,” which is analyzed to determine its makeup.

“This technique presents more of the evidence to show that what is stated in the organic chemistry textbooks can be matched,” Clarke said.

Clarke presented his updated version of this experiment in a paper, “Nitration of Methyl Benzoate—An Extension of an Old Experiment,” at the May 2011 Middle Atlantic Regional Meeting of the American Chemical Society at the University of Maryland.

This year, the American Chemical Society—one of the world’s most prestigious science societies—named Clarke a fellow, an honor bestowed for outstanding achievements in and contributions to science, the profession and the society. He was inducted at the national meeting in Denver on Aug 29.

Clarke, who earned his bachelor’s, master’s and doctoral degrees at Fordham, has been a member of the American Chemical Society since 1953, during which time he has acted as chair and councilor of the New York section and served on multiple committees.

Within the chemistry community, there has been a renewed interest in work that Clarke produced earlier in his career. In particular, scientists are returning to the important contributions he and his coworkers made to the study of amino acid transmitters, specifically glutamic acid.

From 1993 to 1994, Clarke was a visiting professor in the Department of Neurology at Mount Sinai School of Medicine. There, he collaborated with friends at the Parkinson Research Foundation in studying one of the genes involved in glutamic acid metabolism.

“The Parkinson’s researchers found that there was a version of glutamate dehydrogenase that was different in the brain than the one in the liver; we were interested in getting the brain version propagated in plentiful quantities,” Clarke said.

This propagation had potential applications in Parkinson’s treatment because, according to Clarke, in atypical Parkinson’s disease there is a deficiency of the type of this enzyme that metabolizes glutamate, the salt form of glutamic acid.

Additionally, earlier researchers found that glutamate does not get across the blood-brain barrier easily, so it cannot be supplied from the blood and must be produced in the brain to be a neurotransmitter.

These factors led to the researchers’ interest in studying the cloning of the gene involved in this aspect of glutamic acid metabolism, which could be transferred from one organism to another to produce the enzyme in large quantities.

People outside the scientific community may be more familiar with another form of glutamate—monosodium glutamate, or MSG. Most associate MSG, the flavoring agent, with Chinese food, but in the past it was also used in baby food.

Research revealed an important difference in the way that infants and adults respond to glutamate, one with potentially grave consequences.

According to Clarke, MSG that is excluded from the brains of adults can pass through the blood-brain barriers of children in the first one to two years of life.

“When an adult eats monosodium glutamate, very little gets into the brain. Some people report sensitivity to it and that’s why you see signs in Chinese restaurants that read, ‘No MSG added,’” Clarke said.

Studies in young rats revealed that feeding them lots of monosodium glutamate caused brain damage. Due to this discovery, MSG no longer appears in baby food, he said.

While glutamate research hasn’t led to many drugs, Clarke said, he has benefited from one of the drugs that was produced from this work. “When I developed shingles over my eye, I actually took one of them—Gabapentin—which is used to relieve neurological pain and was a drug that I had worked on,” he said.