skip to main content
Return to Fordham University
You are at:Home»Colleges and Schools»Gabelli School of Business»Ceremony Marks Business School’s Transformation 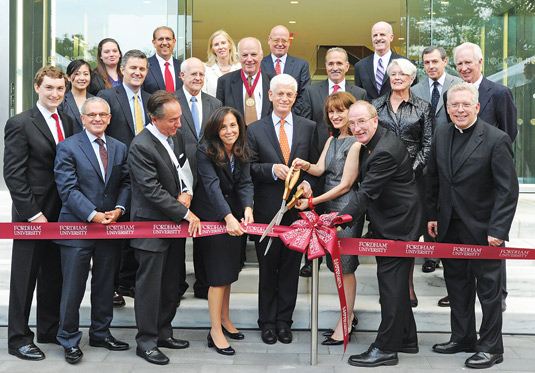 Hughes Hall, the five-story, 19th-century stone building at the heart of Fordham’s Rose Hill campus, was officially rechristened as the home of the Gabelli School of Business (GSB) in a ribbon-cutting ceremony on Sept. 27.

On the steps of the building’s new entrance, Joseph M. McShane, S.J., president of Fordham, linked the occasion, which was attended by a wide swath of the Fordham community, to Sept. 27, 1540. On that day, St. Ignatius Loyola asked Pope Paul III to approve the founding of the Society of Jesus, the mission of which would be to serve God in the challenges and opportunities of the real world.

“His sons, therefore, were to be men of discerning hearts and minds and bold vision who would dream world-engaging, world-changing dreams, and who would engage the world with a rare and bracing combination of street smarts and dogged persistence,” Father McShane said. 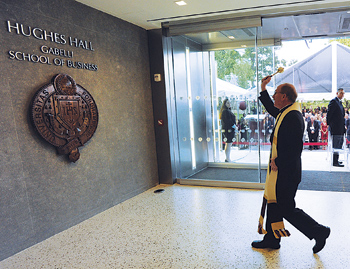 “Mario is a man who is blessed with a great restlessness, a bold and visionary mind, relentless persistence and the street smarts that one would expect of a son of the Bronx,” Father McShane said.

“He is, moreover, a man who has made his mark on the world by engaging the world with and through both his business sense and his remarkable support of education, which he sees as a way of transforming the world.”

The new building is significant for the Gabelli School, as it brings together faculty members and students who were previously scattered at various buildlings around campus. Donna Rapaccioli, Ph.D., dean of the Gabelli School and of the business faculty, called the building a dream come true.

“In two brief months, Hughes Hall has shown me that a great building—one that has life, vitality, and energy—is that way because of the special synergy it has with people, “ she said. “That includes the people inside it— our students and faculty—and the people behind it.”

“It is the perfect mix of old-world charm and modern-day business elegance. It is a physical space that respects history but leads to the future. And it is, most importantly, a home. As any professor here will tell you, the glass walls make it very easy to see who’s at home. And, in truth, we are all at home.”

For Mario Gabelli, the afternoon was an opportunity to look back as well as forward, as he recalled attending Fordham Prep in 1957 when it was housed at Hughes Hall.

He exhorted those in attendance to support faculty, facilities, financing and students, which together form the backbone of higher education.  Education, he said, is one of the underpinnings of meritocracy, which, along with the free market and the rule of law, keeps the nation strong.

“I cobbled my way through the Prep, to college, and to graduate school through scholarships, so we have to find a way to give back and keep that flame burning,” he said.

Stephen Freedman, Ph.D., provost of the University, called the occasion an example of how “miracles of daily life happen every day” at Fordham.

“Hughes Hall is a superb, state-of-the-art facility that moves us to our next level of excellence. Global interconnection defines today’s business world, and Hughes Hall reflects this dynamic reality.”

Roger A. Milici Jr., vice president for development and university relations, said it was almost two years to the day that the Gabelli gift was announced at a kick-off event marking the college’s $60 million campaign, part of Excelsior | Ever Upward | The Campaign for Fordham.

“Today Hughes Hall is the home of the Gabelli School of Business—a state-of-the-art facility within a beautiful and historic structure,” he said. “We cannot thank you enough for your leadership, support, dedication, and service to Fordham.”