skip to main content
Return to Fordham University
You are at:Home»Inside Fordham»Center on Religion and Culture Adds Co-Director

James P. McCartin, Ph.D., author of the widely praised history Prayers of the Faithful: The Shifting Spiritual Life of American Catholics (Harvard University Press, 2010), has been named co-director of the Fordham Center on Religion and Culture, the University announced on Sept. 2. 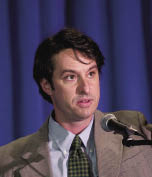 James P. McCartin, Ph.D., is pursuing a book project on American Catholicism and sexuality since 1800.
Photo by Leo Sorel

McCartin comes to Fordham from Seton Hall University, where he has been associate professor of history and associate director of the Center for Catholic Studies.

The recipient of numerous research fellowships and the author of many articles, encyclopedia articles and reviews, he has specialized in questions of Catholicism, public life and American culture. He will be a visiting professor at Fordham.

Founded in 2004 by Peter Steinfels and Margaret O’Brien Steinfels, the Fordham Center on Religion and Culture has drawn capacity audiences to its public forums and conferences on a wide range of religious and cultural topics. These have included the role of religion in American politics, issues of war and morality, religion and science, medieval and contemporary art, memoir-writing and fiction, human rights, faith-based activism, bioethics, young adults and the church, and 9/11 and its aftermath. The center also organizes press briefings, seminars and discussion groups.

“That Fordham has attracted a scholar and author of Dr. McCartin’s stature to be the co-director of the Center on Religion and Culture speaks volumes about the leadership and reputation of Peter and Peggy Steinfels,” said Joseph M. McShane, S.J., president of Fordham. “We are very pleased to welcome Jim McCartin to the Fordham family, and confident that he will build upon their great work.”

The Steinfelses will continue their work in collaboration with McCartin through the 2011-2012 school year.

A graduate of the College of the Holy Cross, McCartin earned his master’s and doctoral degrees in history from the University of Notre Dame, where he worked with R. Scott Appleby and John McGreevy.