Hitting 100 can come with a cost: loss of health, loss of mobility, and even loss of friends and family—all of which would seem to take any anticipation out of the alleged achievement.

But according to Daniela Jopp, Ph.D., many very old individuals say that they are, in fact, very happy. 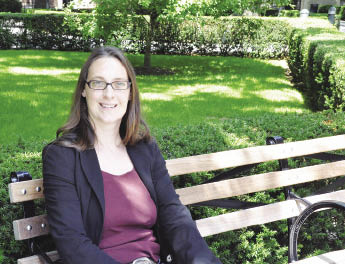 Daniela Jopp, Ph.D., plans to compare the participants of the Fordham Centenarian Study with German and Portuguese centenarians to determine cultural aspects of successful aging.
Photo by Joanna Klimaski

Jopp, an assistant professor of psychology, is studying the “well-being paradox,” or the conceptual incongruity between the decline that comes with old age and the actual welfare of the very old.

“It’s a well-known phenomenon, but we were not aware that this would hold until the end of the life span, and until very old age,” she said. “As a psychologist, I was mostly interested in the mechanisms that may be responsible for this [paradox].”

She first noticed the discrepancy during a centenarian study she was conducting at Heidelberg University in Germany, where researchers were investigating which factors might contribute to longevity. What caught Jopp’s attention, though, was not the age of her subjects, but their level of contentment.

“I was very impressed by the fact that those very long-lived individuals were so happy despite the fact that they’ve gone through many things, and their lives are pretty much characterized by losses and difficulties,” Jopp said.

In 2010, Jopp launched the Fordham Centenarian Study to examine the well-being paradox more closely. Her research marked a turn in longevity studies, which until then mostly analyzed genetic and lifestyle factors that contribute to reaching very old age.

Few, though, had explored whether very old individuals actually led high-quality lives at triple-digits, and if they did, how they accomplished it.

Using funding from Fordham and the Brookdale Foundation, Jopp and her team interviewed more than 100 individuals—many of them living in the Bronx—who were at or just below the centenarian mark (half between the ages of 95 and 99, and half over 100 years old). Though varying in race, sex, and socioeconomic backgrounds, the centenarians share four key psychological strengths, Jopp found.

The first of these is meaningfulness: each centenarian has found a sense of meaning in his or her life, though the meaning itself is unique to each individual.

“Some feel they contribute to their families or to their immediate social partners, and that’s certainly one way of experiencing meaning,” she said. “A lot of people just have goals and projects that they pursue, and that’s another source of meaning.”

Another key component is the will to live, which manifests somewhat paradoxically.

“They all have no problem talking about death and dying. They have their last wills and they’re fully prepared, but they still want to stick around. They say they enjoy life,” Jopp said. “So they have a really interesting attitude toward death and dying.”

This unusual way of viewing their mortality could, according to Jopp, evolve from their exposure to death and dying—one price of advanced age.

“They have seen so many people die [that]they’re the supersurvivors,” she said.

Their singular will to live yields high levels of self-efficacy, the third trait common among centenarians. Regardless of their age, these individuals retain a sense of being able to fulfill their needs and accomplish their goals—a quality that became apparent while simply trying to find time to speak with them, Jopp said.

“They’re really busy,” she said. “We have people who are very involved with activities at their senior centers, and even people who are still working. One of the participants is the CEO of a company. She took over after her husband died.”

Fourth, the centenarians tend to be optimistic, and continue to look forward to their lives.

Jopp found that these four psychological strengths working in concert outweigh factors—such as health and financial resources—that others consider requisite for well-being.

“The interesting thing is that those classic factors that usually predict wellbeing are no longer important to these very old people,” Jopp said. “It’s especially true when it comes to health. These people have learned to change their standards.

“They often have chronic diseases, but they don’t seem to suffer as much as younger people do, because they change their attitudes about [health]. For them, it’s a blessing that they can still be alive.”

The Heidelberg and Fordham centenarian studies, though, revive a familiar dualism within the question of longevity. Do we need superior genetics to get us there, for instance, by protecting us from health issues such as cardiovascular diseases, or can mindset alone chart the course?

“I really believe it’s both,” Jopp said. “There are personality factors that are related to longevity [such as extroversion], but personality also has a large genetic component, so it could be there are direct genetic effects as well as indirect effects via behavior and attitudes.”

When the interviews are done and the data are in by the end of this summer, we might just be a little closer to discovering the secrets to reaching old age—and living it well.

“One of the overarching goals of my studies is to try to figure out how we can shape these psychological strengths over the lifespan,” Jopp said. “For example, can we teach children to be more optimistic and to take a different perspective when something’s not working out? What can we change about our attitudes… to develop a larger coping repertoire?”