skip to main content
Return to Fordham University
You are at:Home»Inside Fordham»Celebration of Teaching and Learning Showcases Big Names in Education 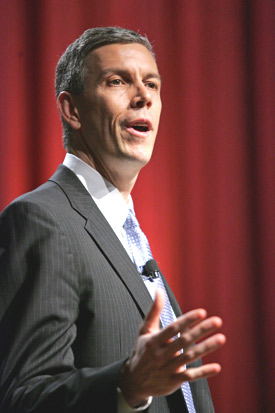 U.S. Secretary of Education Arne Duncan told a packed hotel ballroom on March 12 that education reform is the great civil rights movement of our time. Education, he said, is increasingly the dividing line between the haves and the have-nots.

As such, President Barack Obama has big plans to make it easier for teachers to pay for their training and to raise the bar for standards at schools around the country, Duncan said.

His appearance was part of the fifth annual Celebration of Teaching and Learning, a professional development conference held on March 12 and 13. It was co-sponsored by Fordham’s Graduate School of Education (GSE) and public television stations Thirteen/WNET and WLIW 21, among others supporters.

He emphasized how the Obama administration is planning to spend $10 billion over 10 years to improve access to early childcare.

The federal No Child Left Behind mandates, in particular, have had a deleterious effect on the nation’s elementary education, Duncan said.

“Math and reading are important,” he said. “But so often what I’ve heard is, ‘What gets tested, gets taught. We have to make sure all of our children get a well-rounded education.

“What are we doing with science, with social studies, with art, with dance, with drama? We need more recess,” he said. “We have to give every child a chance to find his or her own path.”

Duncan also faulted the methodology that has been used to determine if a school is failing. More important than absolute test scores, he said, is relative growth.

“If I were a sixth grade teacher, and a child came to me three grade levels behind, and that child left my classroom one grade level behind, under No Child Left Behind, I would be labeled a failure,” he said. “But that child had two years of growth in one year of instruction. Not only is that teacher not a failure, I think that teacher is doing an extraordinary job.”

Income-based loan repayment, another idea that Duncan said is taking shape, was particularly well received by the audience. Too many potential educators, he said, pursue other fields because they have crushing students loans.

“We want to reduce loan repayments to 10 percent of your income to make it much more affordable, and after 10 years of public service—whether it’s teaching or working at a legal clinic in an inner city or rural area, or a medical clinic—those loans would be erased,” he said.
“The stakes couldn’t be higher. The upside couldn’t be more positive. But if we maintain the status quo, it breaks my heart to think what a lost opportunity this will be for our children.”

The day’s final session was a town hall-style meeting moderated by Meet the Press host David Gregory. It featured:

• Jeannie Oakes, director of educational opportunity and scholarship at the Ford Foundation,

• Dennis Van Roekel, president of the National Education Association, and

• Randi Weingarten, president of the American Federation of Teachers.

In a panel earlier that afternoon, Amelio A. D’Onofrio, Ph.D., professor and director of the Psychological Services Institute at Fordham’s Graduate School of Education, weighed in on one of the touchiest subjects educators can face.

The panel, “Cry For Help: Adolescent Depression and Suicide,” brought together several experts to discuss the third-highest cause of death among teenagers. Roughly 150,000 teens attempt suicide in New York annually, and 70 of them succeed, said Kelly A. Caci, a school psychologist in the Newburgh, N.Y. school district.

D’Onofrio urged educators not to dismiss actions of students as simply “looking for attention.” There’s a good reason why they might be looking for it, and he noted it’s helpful to think that the opposite of depression is not happiness, but expression.

Educators can help though. D’Onofrio noted that studies have found that one of the differences between teens suffering from depression who have attempted suicide and those who have not is that the latter say they have at least one person in their life who knows them and accepts them as they are.