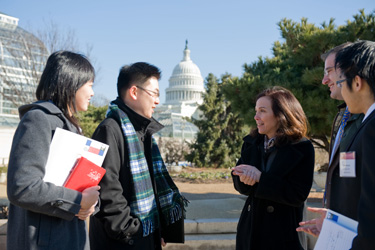 CBA students speak with Donna Rapaccioli, Ph.D., dean of CBA and dean of the faculty of business.
Photo by Bill Denison

The federal government should reform over-the-counter derivatives markets, according to the head of the Commodity Futures Trading Commission (CFTC), who spoke to Fordham students at a conference in Washington, D.C.

CFTC regulates many derivatives called futures. But over-the-counter (OTC) trading is different in that the transactions of financial instruments such as stocks, bonds, commodities or derivatives are done directly between two parties. This trading has increased exponentially in the past 30 years, said Gary Gensler, chair of CFTC.

“[The OTC marketplace] has grown up,” he said in a presentation to 23 undergraduate business students attending a symposium on “The Past, Present and Future of Ethics and Regulations in the Financial Services Industry” on Jan. 27.

“From less than $1 trillion in the 1980s, the value of [the OTC]market has ballooned to more than $300 trillion in the United States—that’s more than 20 times the size of the American economy,” said Gensler, who recommended five corrective actions.

• Regulators should be made to establish capital and margin requirements for all derivatives dealers.

• Dealers should be required to meet business conduct standards that protect the integrity of the market and lower risk from over-the-counter derivatives transactions.

• Derivatives dealers should be subject to recordkeeping and reporting requirements for their over-the-counter derivatives transactions—including a complete audit trail and mandatory reporting of all trades.

• Dealers should be required to bring all of their standardized derivatives transactions onto transparent trading venues.

• Dealers should be made to bring their standardized derivatives transactions to regulated clearinghouses.

McMahon noted that although the national economy has seen “glimmers of hope,” the unemployment rate remains high. Financial reform must include efforts from both politicians and financiers. “Wall Street needs Washington and Washington needs Wall Street,” he said.

“While I don’t agree with everything in the federal reform package, much of that bill struck the right balance. It will benefit American taxpayers and reduce the inherent risk in financial markets,” McMahon said. “But we must avoid overtaxing or over-regulating our financial institutions in a way that stymies job creation and hinders economic expansion.”

Cao said ethics and morals must be present in the financial industry.

“We live in a world so focused on making money any way we can,” he said. “One cause of the financial meltdown was lack of moral perspective.”

Cao added that further regulating the financial industry would not solve the problem. “If we cannot control ourselves, we will do what we can to get around regulation,” he said. “We have to regulate ourselves internally.”

Anu Joseph, a senior in the College of Business Administration (CBA), said her time in D.C. was amazing.

“For us to have direct access to speakers who are so knowledgeable and on top of their fields was just great,” Joseph said. “I’m very grateful for this opportunity.”

The daylong event was the brainchild of John Doscas, CBA ’80, co-founder of Hudson Bay Capital. Doscas wanted to give students a chance to interact with officials and regulators who could affect the financial services industry.

“I told the students, ‘Wall Street wants regulation, but they also want clarity,’” Doscas said. “Forums such as this, where people discuss public policies and their effects and unintended consequences, are all part of the process of clarification.”

“The important thing for students to understand is that public policy can be effected by individuals. It doesn’t just happen in a place like Capitol Hill,” Doscas added.

The event was co-sponsored with the Woodrow Wilson International Center for Scholars, a nonpartisan institute for advanced study.