skip to main content
Return to Fordham University
You are at:Home»Inside Fordham»CBA Students Get Firsthand Advice from Media Pros 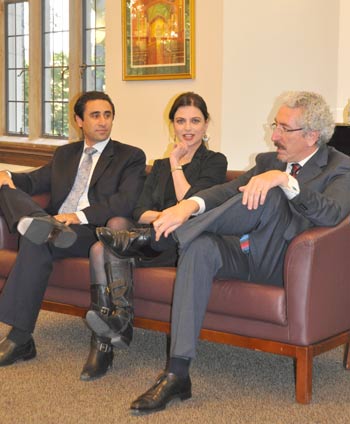 Multitasking and multitalented—those are the two most important traits for anyone seeking a job in the fast-paced world of broadcast media, said Zach Toback, vice president of news operations for NBC.

Toback was joined by Jim Murphy, senior executive producer at Good Morning America; and Bianna Golodryga, financial correspondent for ABC News; to speak to business students on Oct. 6 as part of the College of Business Administration’s Marketing Leadership Forum.

About 50 students participated in a question-and-answer session with the panel to better understand what types of career paths are available and how they can best prepare for them.

“There are a million different jobs in the world that have to do with communications, many more than there ever have been before,” said Murphy, countering the view that new technology has contributed to a shrinking industry.

“There’s more and more communication done on the planet every single day, but it’s done in smaller pieces than it used to be,” he continued. “It used to be one industry with three big companies. Now it’s hundreds of thousands.”

While the Internet, Facebook, Twitter, and iPhone have helped to expand the capabilities of broadcast journalism, the panelists also expressed caution about their use.

“Twitter is also a little bit scary in a sense, when you think about journalism in its purest form and standards and practices, and what is a reliable source and what is a true piece of information,” Toback said. “All of a sudden this information gets out there and you have to ask yourself as a news organization, ‘Is this correct? Should we go with it? Should we wait?’”

Toback cited the story of Michael Jackson’s death as an instance in which journalists heard about the story from unofficial sources before any official pronouncement had been made.

New avenues of information “have an added value,” Golodryga said. “We have to figure out what that really is.”

The single most effective action students can take to break into this changing profession is to become an intern, Murphy said.

“Almost everybody that has been hired on our program in the last three-and-a-half years has been an intern,” he stated. “We spot the people who really get it, and those are the ones we hire.”

Even if the job entails emptying the garbage or answering the phones, “do that better than anybody else,” Murphy advised. “Make friends with everybody, and then you tell them, ‘What I really want to do is this.’”

The panelists stressed that media executives are looking for people who have an understanding of the many facets of broadcasting, both in front of and behind the cameras.

According to Toback, those who can multitask are better storytellers because they understand the whole picture. “You become part of the story,” he said.