Fordham taste buds have voted and the choice is spicy: Buffalo Chicken Pasta is the winner of this year’s “So You Think You Can Cook?” culinary contest.

The zesty dish is also the newest addition to Hospitality Services’ menu rotation at the Rose Hill and Lincoln Center campuses. 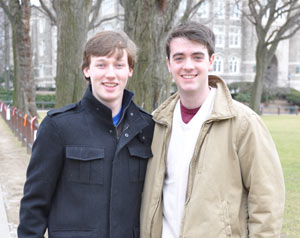 Johnny Keaney and Jake Braithwaite hit upon the recipe by experimenting in their residence kitchen at Walsh Hall.
Photo by Ken Levinson

Roommates Johnny Keaney and Jake Braithwaite, both juniors in the College of Business Administration, collaborated on the creation and perfection of the recipe, which won over the Fordham community at tasting events at The Marketplace, the main student eatery at Rose Hill.

Buffalo Chicken Pasta is pure comfort food with a kick. Keaney and Braithwaite bathe pasta and grilled chicken pieces with a unique sauce of ranch dressing and just the right amount of buffalo hot sauce.

“It’s spicy, so it really excites your mouth,” Braithwaite said.

“But it’s also got that nice creamy base of the ranch dressing,” Keaney added.

“People at Fordham love buffalo chicken,” Braithwaite continued. “Buffalo chicken wraps are arguably the most popular item at the cafeteria, so it was a natural next step for the culinary atmosphere at Fordham to take.”

“So You Think You Can Cook?” is the second culinary contest sponsored by Hospitality Services, following the success of last year’s signature dessert contest, won by the Maroon Velvet Cake recipe of Rick Manista (FCLC ’09).

Keaney and Braithwaite hit upon the recipe by experimenting in their residence kitchen at Walsh Hall. Soon, their suitemates and neighbors were flocking to their table, drawn by the spicy aroma wafting through the halls. 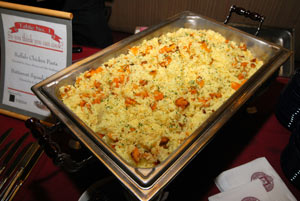 “Everybody knew when we were cooking Buffalo Chicken Pasta,” Keaney recalled.

Rising to the top of more than 30 recipe submissions, Buffalo Chicken Pasta beat out six other finalists, which included:

Keaney and Braithwaite attribute the popular appeal of Buffalo Chicken Pasta to the fact that it veers from the traditional.

“Our recipe was a little bit out there, but that was the magic of it,” said Braithwaite.
It’s also addictive, he continued. “It’s the kind of thing you don’t want to stop eating. Once you start, you just want more.”