skip to main content
Return to Fordham University
You are at:Home»Inside Fordham»CBA Student on Her Way to Oxford University, Career in International Law 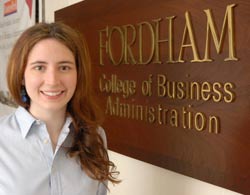 It’s not surprising that College of Business Administration senior Katelyn Calamari lists Richard Branson, Charles Schwab and David Boies as her role models. The entrepreneur, financial guru and lawyer seem natural inspirations for Calamari, a business administration major with a concentration in economics who will study law at Oxford University in the fall and plans to pursue a career in international law. But the men are also heroes to Calamari because they overcame dyslexia to achieve their successes.

When Calamari’s severe dyslexia prevented her from reading well enough to keep up with her sixth-grade class in her White Plains, N.Y., public school, her mother enrolled her in a boarding school for dyslexic students, where she finally learned to read. Her mother then asked the district to return the tax money she paid to it each year to offset the cost of the new school. When the district declined, she sued and eventually won.

“I saw how the law can help people,” Calamari said. “I could see how one court case can affect people’s lives.”

Not only Calamari’s, but others: The case paved the way for other students in the district with learning disabilities to receive similar accommodations, she said. The lesson stuck with her and continues to inspire her interest in understanding how human rights and social justice can be brought to bear throughout the world to protect people.

When Calamari began her college search, she was looking for a school with some dyslexia support services. In the process, she fell in love with Fordham’s Rose Hill campus and small classes.

“I knew I would be able to connect with my professors, even though there were not a lot of formal support services,” she said. “I’ve never been with a nicer group of people. Everyone is so respectful. This is the place I always looked for.”

At Fordham, Calamari joined the debate team, participating in the World Debating Championships in Dublin in 2006, the same year she was a finalist in the Oxford-Fordham Debate Team at the University of Chicago Debating Tournament. Through her debate team travels, she first visited Oxford in 2004 and found herself drawn to the British university. The Matteo Ricci Fellowship winner dreamed of attending and will achieve this goal in the fall, when she matriculates for three years to earn a law degree. She plans to qualify as a solicitor in England and an attorney with the New York bar after graduation. For her, a job with the European Union would be ideal.

“I would love to shape international legal treaties and trade agreements by paying more respect to human rights,” Calamari said. “I would like to see that element brought into the international law scene. It seems hopeful and idealistic, but I think it’s the way we’re going to have to go as we become more globalized.”

Calamari still struggles with dyslexia but won’t let it stand it her way. “I hope that other dyslexic students will be able to realize their educational goals in the manner that Fordham has facilitated me to do so,” she said.