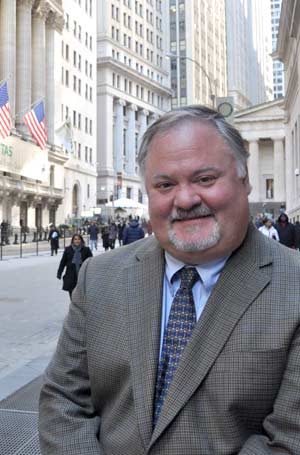 Greg Summers’ generosity will fund scholarships for veterans or the children of veterans who were killed or wounded as a result of their service in the Vietnam War.
Photo by Patrick Verel

His son, Greg Summers Jr., had just completed airborne training with the U.S. Army, and had flown to Georgia to celebrate at a steakhouse with 12 of his jump school classmates.

“I went to dinner with these young people and was extremely impressed. Most of them had some college already, and some of them had families,” Summers said.

“I had been led to believe that many people join the military because they had no job and no money for education. It struck me that people don’t join the military in wartime to get a few extra dollars for college. They join out of a sense of duty and patriotism,” he said.

“These soldiers are giving up years of their lives when they could be out earning money or finishing their education,” he said. “They deserve the benefits of attending the best schools in the country, such as Fordham. Sometimes, the G.I. Bill doesn’t cover all of the costs, so private citizens must step in to fill the need.”

With that in mind, Summers, who parlayed an accounting major into a career with Coopers & Lybrand (now PricewaterhouseCoopers) and several Wall Street firms, and who is now chief investment officer for Gerber Capital Management, made a $125,000 gift to the College of Business Administration (CBA).

His generosity will fund a scholarship for veterans who have been admitted to CBA but do not qualify for the top-level benefit in the G.I. Bill. If no such veteran is available, the gift will go to children of veterans who were killed or wounded as a result of their service in the Vietnam War.

The first recipient is a student whose father is a disabled Vietnam veteran.

Summers, a native of Brooklyn who lives in Watchung, N.J., considered enrolling in ROTC as a freshman in 1974. But with the Vietnam War ending, he was told that the Army was shedding—not recruiting—soldiers.

In 2008, Greg Summers Jr. deployed with the Army to Iraq. Though his father said he was nervous about the deployment, he also said he was proud of his son for putting his education on hold and his life on the line to serve his country.

Summers worked with Patrick J. Socci, Ph.D., associate dean of CBA, to find a way to help military families. Socci’s son served for four years with the Marines and did tours of Afghanistan and Iraq before enrolling in the Graduate School of Business Administration at Fordham.

Socci said that Summers’ desire to help military families resonates deeply. “A good friend of my son was a trader on Wall Street. He walked away from that to serve the country,” he said. “He really gave up a lot.”

For Summers, the gift is also a way to express his appreciation for the business preparation he received at Fordham. He recalled reporting to Coopers & Lybrand on his first day, where he felt just as prepared—if not more so—than two colleagues who had graduated from Ivy League schools.

“I received the really good nuts-and-bolts Jesuit education that the school is famous for, and I was ready for that first day,” he said.

“It was very important for my career to get that running start, instead of having to spend time catching up with the real world. Attending Fordham was a tremendous advantage for me.”