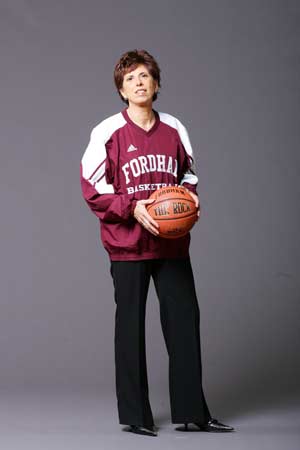 Basketball coach Cathy Andruzzi halts a practice play and counsels a player. With a brisk, forward motion of her hand, she simulates a drive through a gaggle of limbs. “You’ve got to step into it. You’ve got to fling that ball if you can’t get through.” The team tries the maneuver again. And again.

The game of basketball is a dance, and Andruzzi knows her choreography. A lifelong player, she admits that the sport never strays far from her thoughts. As the Rams’ new women’s coach (she started in May of 2006, inheriting a team with a lean roster), Andruzzi sees a chance to build a championship team out of a program that has not had a winning season in 10 years. And she plans to build it like she builds everything — from the ground up.

“I grew up on basketball,” Andruzzi says, “My father was a big sports fan and the first time I held a basketball I was very young. I tried a few different sports, but when you grow up on the Lower East Side of New York City, basketball is the game that you play. You have basketball courts in your back yard – not tennis courts. I knew back then what my calling was. I always just loved the game.”

Andruzzi’s first experience with organized teams was through Catholic Youth Organization (CYO) games. She attended Catholic schools and says she felt lucky to have been encouraged by her parents to play the game in an era when women’s sports teams were in their infancy. (Her father, she says, attended every one of her high school games.) She decided to go to Queens College partly because it had a reputable basketball team and a strong coach: Lucille Kyvallos. The ’72-’73 women’s team, in which Andruzzi was a guard, was fresh off the passage of Title IX laws, giving equal access in collegiate athletics to women. The team ended up with a second-place ranking in the Association for Intercollegiate Athletics for Women (AIAW) in the 1973 championship playoffs and went on to a successful decade of “firsts.”

“Lucille Kyvallos was a pioneer in women’s basketball,” Andruzzi said. “She was a fabulous, innovative coach. Back then, she would have us practice against the guys. She was a disciplinarian, a visionary way ahead of her time. She saw women’s basketball where it is today. She gave us the foundation, confidence and knowledge to move up and take risks.”

The women’s game has indeed changed in her lifetime. “In my era, girls were not much encouraged to play sports. When I was a little girl, there weren’t any AAU [Amateur Athletic Union] teams. Now, young girls of 9 and 10 are already playing on travel teams. They are able to develop skills at a very young age – the kind of thing men have been able to do all their lives,” she said.

Andruzzi got her first coaching job in her twenties at Wagner College in Staten Island and quickly moved to East Carolina University, where she coached from 1978 until 1984. At that time, she grew restless to try another career that was still sports-connected, but which incorporated marketing and business. Over the next decade, she worked as a marketing director at Domino’s Pizza, building a $3 million franchise in New Jersey, and easily slipped into the media end of sports at the same time, doing commentary, production and promotions. She created and co-produced the first television special devoted to the National Collegiate Athletic Association (NCAA) women’s basketball tournament in 1996, bringing in Domino’s Pizza as one of the show’s sponsors. That same year, Andruzzi started her own basketball school, the Druzz School, and in 1997 she landed a position as general manager of the Philadelphia Rage of the now-defunct American Basketball League. The following year she became executive director of the NCAA Women’s Final Four, managing a $2 million budget and creating community outreach programs to promote women’s basketball.

“Even when I was marketing, I knew I wanted to help grow the sport,” she said.
Andruzzi’s management skills and talent eventually drew the attention of universities looking to recruit players and hire a coach. Hungry to get back to coaching, she took a job at Rutgers University as assistant coach of the women’s team, and moved to Seton Hall University a year later.

“All the experience that I had running a corporation transferred naturally to coaching,” she said. “In today’s athletic world, it’s all about recruiting, which requires business savvy. Then it is about coaching. Players often underestimate their ability to raise themselves to a totally different level. Those who work at player development—ball handling, shooting, defense skill—are going to flourish.”

An integral part of Andruzzi’s mission at Fordham is to “brand” the women’s team—a mission that she believes in and feels confident in implementing, since she was a basketball player herself.

“Fordham University offers an outstanding academic institution in a top-notch athletic conference (the A-10), in the greatest city in the world,” she said. “My commitment is to impress women’s basketball on the student athlete who is looking for those three things, and make Fordham her destination.”

In addition to helping her team find the limelight, Andruzzi has seen some of it herself. In 2004, she was inducted into the New York City Hall of Fame as a member of the Queen’s College team, the first women’s team to be included.

“I had wonderful teammates that till this day continue to get together,” she said. “We were the essence of team!”