skip to main content
Return to Fordham University
You are at:Home»Inside Fordham»Catholic Writers Discuss Hope at Religion and Culture Forum 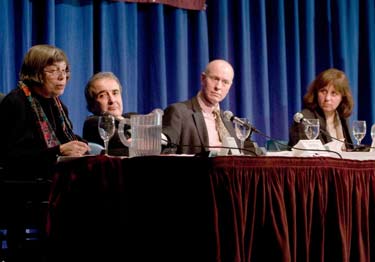 Writers discuss their ideas about hope at an event sponsored by the Center for Religion and Culture.
Photo by Leo Sorel

In a world that seems to have gone horribly awry, where do Catholics turn for hope? That was the question tackled on March 11 at “Take Heart: Catholic Writers On Hope,” a panel discussion presented by the Fordham Center on Religion and Culture.

Ben Birmbaun, author ofTake Heart: Catholic Writers On Hope in Our Time (Crossroad Publishing, 2007), moderated the guests, which included poet, essayist and memoirist Nancy Mairs; poet and St. John’s University law professor Lawrence Joseph; New York Times reporter Dan Barry; and author and Smith College professor of religion Carol Zaleski. Together, they mused about the ways they find hope for personal issues, as well as those for the human race and the Catholic Church.

Birmbaun opened event, which was held in Pope Auditorium on the Lincoln Center campus, by noting that in the Bible, hope is the most modest of the three theological virtues. There are 364 references to it, compared with 825 for love and charity. That’s not surprising, he explained, since it’s also the hardest to grasp.

“Faith is faith, in that one has faith in a higher being; one has faith in God. It’s a light. Sometimes it flutters, but it’s there. Love is love; we all know what it is. It’s scary and it’s wonderful and I think that it is correct to say that it is stronger than death,” he said. “Hope, however, is kind of this vague virtue. It’s not a thing in and of itself. Once you attain the thing you hoped for, hope disappears. You don’t need it anymore.”

The role that hope plays for people with intense personal pain was a big part of the discussion. Mairs, who suffers from multiple sclerosis and whose husband was diagnosed with melanoma in 1990, said she considers herself to be one of the most hopeless people in the traditional sense, because she does not expect life to get better for her, her husband or the human race.

“Our technological capabilities have so far outstripped our moral development, that it seems likely that we will blow ourselves up with nuclear devices or suffocate ourselves with petro fumes or poison ourselves with chemical waste or drown ourselves in melted glaciers,” she said.

This isn’t to say that Mairs, who converted to Catholicism in the 1970s but who has since grown disillusioned with the church, has completely given up.

“I have three grandchildren, and I remember after the first one was born, looking at him and thinking, ‘I have seen my immortality,’” she said. “So it is not my hope in a specific way; it’s more an assurance of continuity that I had never felt before.”

Barry, whose father died four months ago after developing lung cancer and who won his own battle with cancer recently, said he still struggles to define hope as he understands and experiences it.

Zaleski recounted a story about her son, who once left a note for the tooth fairy asking if he could keep both his tooth and the normal allotment of a dollar and a pack of baseball cards. When he realized he couldn’t, he quickly recovered from his initial disappointment.