skip to main content
Return to Fordham University
You are at:Home»Inside Fordham»Catholic and Jewish Missions Merge at Nostra Aetate Dialogue 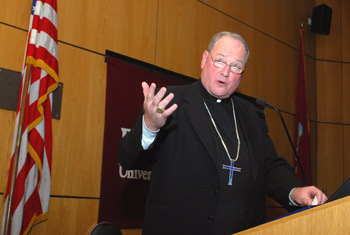 Archbishop Timothy M. Dolen acknowledges that the Catholic Church is retaining 68 percent of its membership.
Photo by Ken Levinson

Two of New York’s most respected spiritual leaders joined hands on Nov. 5 at Fordham University, calling for an active inter-religious agenda to combat the world’s ills and to strengthen young adults’ engagement with their faiths.

Archbishop Timothy M. Dolan, the leader of Archdiocese of New York, and Arnold M. Eisen, Ph.D., seventh chancellor of the Jewish Theological Seminary, acknowledged a secular crisis that sees generations of faithful teenagers and young adults in America drifting away from the religions of their birth.

Quoting from a United States survey released last year by the Pew Forum on Religion and Public Life, Archbishop Dolan said the Catholic Church is retaining about 68 percent of its members, while the Jewish faith is retaining 76 percent.

“The research tells us that Jews and Catholics are facing a crisis in that today’s members do not value their received religions as much as their grandparents did. People today want to believe, but not belong,” he said. “To engage this development is a pastoral project that can—and must—unite Catholics and Jews.”

Both speakers acknowledged some previous tensions between Catholics and Jews. Archbishop Dolan referenced Pope Benedict XVI’s recent rehabilitation of an excommunicated bishop, Richard Williamson, who denied the Holocaust, and some of the church’s missals that Jews interpreted as a call for their conversion to Christianity.

Eisen stressed the need for frank dialogue between the two religions to work toward mutual understanding and respect of each other’s beliefs.

The greater challenge, said Eisen, is the growing nihilism that sees religion as an agent of intolerance rather than a cure for it.

“These are very scary times,” Eisen said. “Many Americans are unemployed, our planet is threatened . . . and hundreds of millions of people live on a dollar a day.

“Those of us who stand for faith have an obligation to raise the good name of faith from the dust,” he continued. “The Torah teaches that all of us are needed for this task—to serve God, and to serve God’s creatures with all our heart.”

Religions need not engage, he said, in “cocktail chatter,” but would benefit more by moving past dialogue and into partnership on the larger tasks at hand—combating evil in the world that causes poverty, suffering and the loss of faith, and “preventing Hell on earth.”

The two leaders questioned the lasting strength of fundamentalist religions that have swept the United States and led to the creation of megachurches. Such religions, Archbishop Dolan said, attract “dabblers” but not generally lifelong members to the faith.

Eisen predicted fundamentalism would not hold sway much longer, saying it was ill-equipped to explore complex questions of religious faith and, therefore, to survive in a multi-faith world that requires religious tolerance.

Finally, both speakers called for the creation of shared activities among young Jews and Catholics, especially activities around volunteerism and community engagement.

“The picture of Catholics and Jews working together for good is a very powerful image,” Eisen said, referring to a photo of Martin Luther King Jr. and Rabbi Abraham Joshua Hershel marching side-by-side for civil rights.

The event was co-sponsored by Fordham’s Archbishop Hughes Institute on Religion and Culture and the Jewish Community Center in Manhattan. Edward Bristow, Ph.D., professor of history, served as moderator.

The Nostra Aetate Dialogue can be traced to the Nostra Aetate (In Our Time) declaration by the Second Vatican Council stressing the importance of relationships between the church and non-Christian religions.