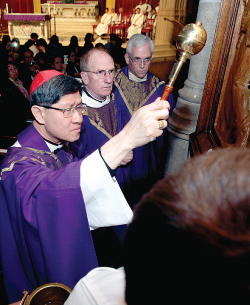 During the celebrations that marked his visit to Fordham at the end of March, His Eminence Luis Antonio G. Cardinal Tagle, Archbishop of Manila, honored a Jesuit who provided hope and comfort in the Philippines during the dark days of World War II.

The name of that Jesuit—John Fidelis Hurley, S.J., a 1914 Fordham graduate—was inscribed on the Fourteenth Station of the Cross in the University Church last fall. Cardinal Tagle approached the inscription and gave a blessing on March 29 while celebrating Mass at the church.

While serving as superior of the Jesuit mission in the Philippines during its occupation by the Japanese, Father Hurley set up an underground system for distributing food, medicine, and money to internment camps where American and Filipino soldiers and civilians were held.

“He kept the spirit of those folks alive during that occupation,” said Henry Schwalbenberg, Ph.D., associate professor of economics and director of Fordham’s Graduate Program in International Political Economy and Development, who regularly visits the Philippines with students in the program.

He noted that the relief organization set up by Father Hurley after the war was a forerunner to Caritas Manila and Catholic Relief Services in the Philippines.

“All the institutions that are now responding in Leyte after (Typhoon Haiyan) are descendants of what he set up to deal with the relief work after the war,” Schwalbenberg said.

After reading the blessing, Cardinal Tagle placed his hand on the inscription of Father Hurley’s name for several quiet seconds. Then he turned away to resume the service.