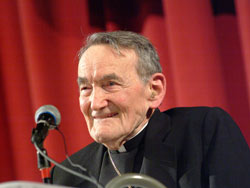 The Society of Jesus faces many of the same challenges today that it did upon its founding in 1540. To maintain relevance in the new millennium, said Avery Cardinal Dulles, S.J., the Jesuits must stay true to the ideals of Saint Ignatius himself: living lives of evangelical poverty, and synthesizing the active and contemplative lives.

“The challenges of our day are different but analogous to the 16th century,” said Cardinal Dulles. “The Ignatian charism is not outdated.”

The Cardinal’s theme, The Ignatian Charism at the Dawn of the Twenty-First Century, spoke to the continued relevance of the Jesuit order in an increasingly fast-paced and secular world. He identified a charism as a “gift of grace for the benefit of others” and said that the Jesuits should continue to abide by the founding principles of Saint Ignatius, the foremost being a “life of evangelical poverty…which is at the heart of all Jesuit apostolates.”

Cardinal Dulles said that the Church and Society of Jesus face many of the same challenges that Ignatius and his followers did in the 16th century: rapid change, “globalization,” a divide between Christianity and Islam, and defections from Catholicism to other forms of Christianity.

There need not be a great conflict between faith and science, said Cardinal Dulles. He listed many of the great Jesuit men of science who have “built bridges between faith and reason, between theology and science… scholars who equipped themselves to enter into new fields and show the coherence between the new learning and the Catholic heritage of faith.”

There is a population waiting to be called, said Cardinal Dulles. The order has to continue to preach in an “accommodated style” (as did Ignatius and his first followers, who went to the corners of the earth and preached in different languages), because many places around the world still have potential converts.

“The fields are ripe for the harvest, but the laborers are few,” he said. “One wonders what the Jesuits of [Peter Faber’s] days would have done if they were alive today to see the defection of so many Latino Catholics [here]and in Central and South America.”

The lecture coincided with the final week of the Ignatian calendar, and was the last of the Cardinal’s talks concerning the central figures in the founding of the Jesuit order. 2006 also marked a half-century since Cardinal Dulles’ ordination, and his twentieth year at Fordham, where has been the Laurence J. McGinley Professor of Religion and Society at Fordham since 1988. It has also been five years since Cardinal Dulles was elevated to the College of Cardinals by Pope John Paul II, the first American–born theologian not a bishop to be honored with the rank.