skip to main content
Return to Fordham University
You are at:Home»Faculty Profiles»Capturing an Exquisite Slice of Existence: A Photographer’s Calling
The first of a series of photos Apicella-Hitchcock took in Rome while teaching Documentary Photography: Italy. See the full series in the slide show below.
For Stephan Apicella-Hitchcock, taking a photograph is the ultimate expression of engaging with life.

“There’s something bordering on spiritual when all the elements of the world by chance are in synchronicity, and you—and only you at that moment in time—are paying homage to time itself,” he said.

As artist in residence in the Department of Visual Arts and programmer for the Ildiko Butler Gallery, Lipani Gallery, and Hayden Hartnett Project Space, Apicella-Hitchcock wears several hats at Fordham. One is supervision of Documentary Photography Japan, a six-year-old course in which he chaperones six to eight students on a trip to Japan over the winter break. 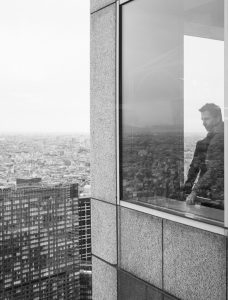 Apicella-Hitchcock taught at the Tokyo University of the Arts in 2005. He said that, like New York, Tokyo is the kind of place where the more you look for things to photograph, the more interesting it becomes. He and fellow visual arts professor Joseph Lawton teach a similar course in Italy in the summer. In both cases, upon return stateside some 3,000 images are edited down to 64, which are then printed and bound in a book.

Both are digital courses. Apicella-Hitchcock said the goal is to appeal to students with digital photography, which has become democratized thanks to the ubiquitousness of cameras on phones.

“But then we take these interested parties and hook them into the more sophisticated photography, which is photographic syntax: putting together sequences of images that build up and create a larger meaning than the individual integers,” he said.

“The meaning in between the photographs is where the poetry of the art form comes out. One can start to create flashbacks or premonitions of what is to come. One can definitely develop subtleties, so it’s not just the bombast of a greatest hits.”

One of the joys of working with a small group of students is witnessing how creative they can be, since they have no pre-conceived notions about the craft, he said.

“I say to students, only you can do what you’re doing at this point in time. Only you have your sensitivities, your history, your cultural background, your gender background, and your age. And since you’re college students, your youthful enthusiasm is an asset. Your fearlessness allows you to barge into situations that you have no businesses being in, had you thought about it. And consequently, you get amazing primary research.”

With the Ildilko Butler gallery, Apicella-Hitchcock works with students who have finished their senior projects, faculty showing off their latest works, and artists whose projects fit the bill for a specific theme. Sometimes it’s as thematically open as landscapes; other times its more specific, like the 2013 collection of art forgeries that was timed around the Fordham/FBI International Conference on Cyber Security.

“I corral artists, I trust them. They make something, and afterwards you find sometimes tenuous but genuine connections between the works, which is an exploration for them and for myself as well, which is why [artists]do it,” he said.

He lists Gary Metz: Quaking Aspen: A Lyric Complaint, which Apicella-Hitchcock curated with Lawton in the winter of 2014, as one of his favorite exhibits. Metz took black and white landscape pictures of Aspen, Colorado, that challenged the prevailing notions of nature as sublime, heroic, and unspoiled. Metz assumed the viewer was intelligent, and could handle a certain amount of ambiguity, Apicella-Hitchcock said.

“Unlike a stereotypical Hollywood film, you don’t see the ending coming from a mile away. It’s more like European art film, where, even though you’ve watched the movie 20 times, you’re still not sure what its about,” he said.

Advances in technology have opened up new realms in photography, and Apicella-Hitchcock said he’s particularly intrigued by cameras that can now operate in extremely low light, without the need for flashes. But in the end, he said a good photograph always depends more on the human behind the camera.

“I think it was Paul Strand who said in order to make a good photograph, you have to have something to say about the world. Photography is still all about encoding that image with the photographer’s sensibilities, intelligence, and sensitivity to whoever or whatever was in front of them,” he said.