skip to main content
Return to Fordham University
You are at:Home»Inside Fordham»Cancer Researcher Says, “We Have the Answer”

A luminary in cancer research brought a message of hope to the Fordham community on Sept. 19, outlining the medical advances scientists have made in recent decades and identifying ways to address the remaining challenges. 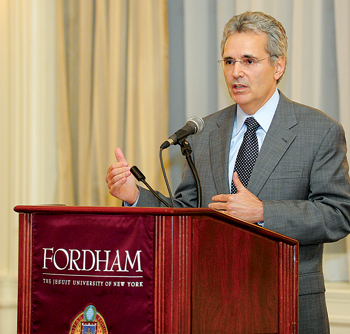 Ronald A. DePinho, M.D., FCRH ’77, told a Fordham audience that scientists are closing in on a cure for cancer.
Photo by Chris Taggart

“This period of human history is going to go down as a major turning point for the human race,” Dr. DePinho told members of the Fordham community. “I believe that it’s going to rank up there with the discovery of fire and the advent of socialization.”

He called the cracking of the genetic code in 1953 a “seminal event” that prepared scientists today to understand life “on its most elemental level” and which had a huge impact on the successful treatment of disease.

However, there are new challenges as a result.

Thanks to improvements in vaccination, antibiotics, hygiene, and surgery, life expectancy has doubled worldwide. But a larger, older population means greater incidences of cancer, diabetes, and cardiovascular disease.

By 2050, he said, we could be spending $1 trillion on Alzheimer’s disease alone.

“We have a very significant issue … the changing demographics and the impact that this is going to have on our children and their children with respect to handling the burden of age-related disease,” he said.

Nevertheless, Dr. DePinho said he is confident that there is a solution.

“It’s science. It’s to understand these diseases sufficiently so that we can prevent them from happening in the first place, detect them early, or, if they occur, definitely resolve them.

“With today’s knowledge and technology, we actually can do that.”

On Sept. 21, Dr. DePinho publicly announced that MD Anderson would be launching a $3 billion initiative to dramatically reduce cancer deaths over the next 10 years. The Moon Shots Program, as it is known, will capitalize on technological advances to accelerate the pace at which scientific discoveries are turned into clinical practices. For patients diagnosed with the leading cancers—including lung cancer, melanoma, breast and ovarian cancers, prostate cancer, and three types of leukemia—Dr. DePinho said that a cure is in sight.

At Fordham, Dr. DePinho explained some key achievements that augured well for finding a cure. He said that when the human genome was first sequenced in the 1990s, it took 12 years and cost $3.6 billion to map one genome. Today, a human genome can be sequenced in just a few hours for $300.

With the curtailed cost of sequencing and ongoing improvements in genetic engineering that can ‘silence’ gene mutations, interdisciplinary researchers have begun mapping tens of thousands of tumors, so that healthcare professionals can target treatments for specific cancers.

Dr. DePinho, who was the 1977 Fordham salutatorian, also had a message for the students.

“When history writes how we conquered the great diseases, your generation will write the final chapter,” he said.