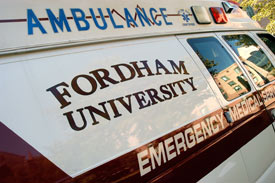 Whether it’s a call about a broken bone or a request for a Band-Aid at 3 a.m., Fordham University Emergency Medical Services has been responding to emergencies at the Rose Hill campus for 30 years.

“We’ve responded to calls by Jesuits, faculty and the Sodexho cafeteria workers,” Niehaus said. “And we’ve even helped people off campus. Last year, one of the guards right outside the gates saw someone get hit by a car and we responded, taking that person to the hospital.”

Some might be surprised to learn that the Fordham EMS operation is actually a student-run club with service available 24 hours a day, seven days a week during the academic year. Last year, the unit responded to 604 calls, some of which included students suffering from seizures, dehydration and fractures.

“This is an incredible group of students,” said Kathleen Malara, C-FNP, a nurse practitioner and director of the Fordham University Student Health Center and advisor to the unit. “They might be in class all day and be on call all night and they do this on a volunteer basis.”

The unit traces its roots to 1977, when a small group of students who wanted an on-campus first-aid squad started the Student Emergency Response Group, or SERG, Niehaus said.

Officially recognized by the university as a club in 1981, the group of volunteers began responding to emergencies on foot, armed with a “jump bag” full of basic medical supplies. They mostly provided first aid until an ambulance from one of the area hospitals arrived on the scene, Niehaus said. 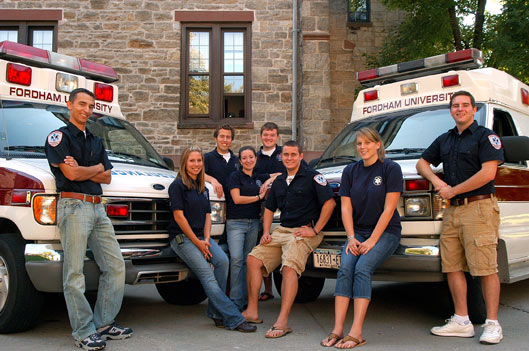 In 1988, SERG was officially registered with the State of New York Department of Health, changed its name to Fordham University Emergency Medical Services, and joined the National College EMS Foundation.

“Fordham was one of the first … colleges that had a program like this back then,” Niehaus said.

Today, the unit has 11 officers certified by state of New York as emergency medical technicians and 20 general members, some whom serve as drivers or attendants. This semester, Niehaus said, 75 students are in the process of joining the club.

Each member must undergo a month of training at Our Lady of Mercy Hospital in the Bronx or Westchester Community College, where they learn how to take vital signs, administer cardio-pulmonary resuscitation and other basic medical skills.

Each crew is led by an EMT, who has completed some 200 hours of classroom and practical training, as well as emergency room rotations. During the overnight hours, there is a crew on call, with one member having quick access to one of the club’s two ambulances parked outside his or her dormitory building.

To get in touch with EMS unit, students must dial security at 2222, a number that is programmed into every on-campus student’s cell phone in the beginning of the academic year.

For Tom Reen, assistant director of the EMS unit and an FCRH junior, the experience of serving the university community in such a way has been one that will stay with him long after he leaves Fordham.

“It’s a group that is well respected and known by the administration,” Reen said. “I wanted to be part of that and I ended up meeting some of the truly best people I have ever worked with.”