skip to main content
Return to Fordham University
You are at:Home»Inside Fordham»Campion Scholars Win Prestigious Awards Across the Disciplines

Fordham marks 2012 as another successful year for reaping prestigious awards, as dozens of graduates
and undergraduates prepare to take their studies around the world. 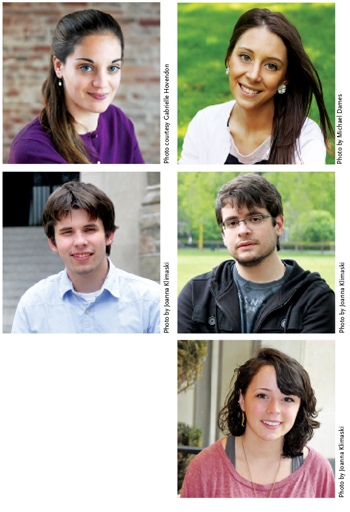 As of May 15, Fordham students earned 154 national and international awards, including a Cambridge Overseas Trust Scholarship and Fordham’s first Lilly Graduate Fellowship in Humanities and the Arts.

Caitlin Meyer, FCRH ’12, is the recipient of a Cambridge Overseas Trust Scholarship to attend the University of Cambridge. Meyer, who was a Truman Scholarship finalist in 2011, will have the opportunity to obtain an M.Phil. in politics through the rigorous 10-month program.

A political science major, Meyer is passionate about civic engagement; she served this year as president of Fordham’s United Student Government and has been active in student government, she said, since second grade.

“Our young people are becoming more and more disillusioned with government and government processes,” she said. “Some statistics say that you’ve got less than five percent of U.S. citizens who say they trust the government.

“I’m interested in finding ways to reengage citizens—not just here, but also abroad,” she said. Meyer has held several internships in her hometown of Oakland, Calif., including an internship with U.S. Senator Dianne Feinstein.

Gabrielle Hovendon, FCRH ’11, is one of 16 graduate students chosen nationally to join this year’s elite cohort of Lilly Fellows. The three-year program brings together humanities students who are interested in teaching at church-related colleges and universities.

Hovendon, an English major, will begin a master’s in fine arts program in creative writing at Bowling Green State University in the fall. She will receive a yearly financial award and will interact regularly with other Lilly fellows at conferences.

“I was interested in being part of a community of like-minded graduate students and faculty,” said Hovendon, a native of Watertown, N.Y. “I also have a strong sense of social justice, and I believe that teaching at a church-related college provides excellent environment to incorporate my social concerns into my writing and my teaching philosophy.”

In addition to writing short stories, the aspiring writer has already written a novel—for which she has secured representation.

Other prestigious scholarships won this year include:

• four Boren awards for international study, to GSAS students Jonathan Clay, to Brazil, and Batya Rotter, to Israel; and to Amanda Angri, FCLC ’12, to the United Arab Emirates, and FCRH sophomore Mary Hamilton, to China; Angri also received a Qatar Scholarship, which she will use to study Arabic at Qatar University;

• three National Science Foundation (NSF) Graduate Research Fellowships to Stacey Barnaby, FCRH ’11, and Julianne Troiano, FCRH ’11, both of whom are pursuing doctorates at Northwestern University, and Rebecca Triano, FCRH ’12, who will begin a doctoral program at the University of California, Berkeley, in the fall. Barnaby was also awarded a National Defense Science and Engineering Graduate Fellowship (NDSEGF), another prestigious award for graduate level science research;

• two NSF Research Experience for Undergraduates (NSF REU) summer research grants to FCRH sophomore Emily Dinan, at Lafayette College, and junior Nazmul Sarker, who was accepted to both the University of Iowa and the University of Oregon programs;

• internships at the White House and the World Health Organization to Joseph Carnevale, FCLC ’11;

• a DAAD RISE (Research Internships in Science and Engineering) scholarship to FCLC sophomore Molly Clemens, who is the first Lincoln Center student to receive the scholarship;

In addition, 2011 Truman Scholar Abraham Mercado, FCRH ’12, will work as a political consultant in Puerto Rico upon graduating and begin his work in public policy the following year.

“Abraham was the second Fordham student from Puerto Rico to win a Truman Scholarship, the most significant American scholarship for students who want to be involved as change agents in some area of public service,” said John Kezel, Ph.D., director of prestigious fellowships.

Sophomore Molly Clemens, the first Lincoln Center student to receive the DAAD RISE scholarship, will travel to the University of Bayreuth, Germany, in June to study climate change. The internship program offers undergraduates the opportunity to work with research groups at top research institutions in Germany for up to three months

Fulbright winner Mateusz Plaza, a philosophy and history double major, will travel to Krakow, Poland for the year to the Jozef Tischner Institute and Ignatianum University. His research will focus on Tischner’s work on the ethics of solidarity.

“I am particularly interested in how this philosophy can form the ideological basis of a political community that is separate from the common socialist and capitalist tendencies in politics today.”

Plaza, who is of Polish ancestry, will interview residents and scholars in Krakow, many of whom knew Tischner personally. The fellowship, he said, will bolster his plan to study continental philosophy on the graduate level.

“I chose the program because of its intensity,” Razis said. “I wanted something rigorous and out of my comfort zone, so I applied to the institute in Kazan. English isn’t widely spoken there.”

Fordham had several prestigious award finalists: Jayson Browder, PCS ’13, is the first Truman Scholarship finalist for the School of Professional and Continuing Studies.

Kezel said the Campion Institute has been working closely with the deans of the various schools to identify potential scholarship candidates.

“As an independent, University-wide office, we continue to mentor all students who meet eligibility requirements for major scholarships,” he said.