skip to main content
Return to Fordham University
You are at:Home»Inside Fordham»Campion Scholars Receive Truman, Borens, Fulbrights and More in 2010

The Truman award went to Joseph Anthony Carnevale, a junior at Fordham College at Lincoln Center (FCLC). It was the first Truman earned by an FCLC student. 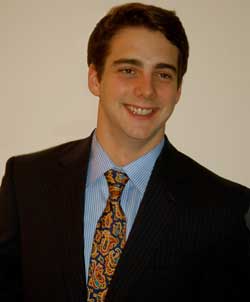 Joseph Anthony Carnevale hopes to work as a physician with an advanced global public health foundation in the developing world.

Carnevale, a double major in natural science and theology, plans to use the scholarship to attend medical school and simultaneously earn a master’s degree in public health. He hopes to work as a physician with an advanced global public health foundation in the developing world.

“My focus is on organizations like Partners in Health and Doctors Without Borders,” said Carnevale, one of 60 scholars nationwide chosen from a pool of more than 575 candidates.

“Specifically, I like inter-community development and involvement because of its integration of healthcare and education to empower under-served communities,” he said. While at Fordham, Carnevale has maintained a 3.9 GPA while performing extensive service in China, Kenya and the United States.

Other highlights on this year’s prestigious scholarship roster include:

“All in all, it has been a banner year, with Fordham students taking part in the most important national and international competitions and proving to be formidable contenders,” said John Kezel, Ph.D., director of the University’s St. Edmund Campion Institute for the Advancement of Academic Excellence.

As Fordham’s first Cambridge International Scholar, Mohammad Usmani, a native of Pakistan who moved with his family to Brooklyn six years ago, receives fully paid tuition and living expenses toward a doctoral degree in science.

Usmani will be doing research in rheumatology with an eye toward attending medical school once he earns his doctorate. He already has extensive undergraduate research experience in cancer biology, Parkinson’s disease and the spread of AIDS.

“There is an abundance of research on cancer biology and on Parkinson’s disease, but arthritis is something that affects millions of people and does not get as much attention,” said the senior, whochoseto attend Cambridge over medical school. “My goal is to do research and to see patients at the same time, to connect both science and medicine.”

With an NSEP Boren fellowship to Cambodia,Brian Quinlan plans to study the Khmer language in Phnom Penh. After their fellowships, Boren winners must spend time working in the federal government in a position that contributes to national security. Quinlan said he hopes eventually to work with the Department of Commerce on trade regulations in East Asia. He is fluent in the Thai language and in Lao, the language of Laos.

“A lot of America’s global influence is through trade,” said Quinlan, who leaves for his fellowship in August. “I hope to take what I learn on the ground and use it to help shape trade policy with Cambodia.”

Urban Fellows winner Annel Hernandez recommended a new model for nonprofit agencies that includes a partnership with a local college or university.

“Nonprofit agencies need to find more efficient ways to operate, and the best resources are found at colleges,” said Hernandez, who also won the Somos El Futuro Young Latina Role Model Award from the New York State Assembly. “I envision something where the nonprofit storefront is in the community, but run by the University—capitalizing on the resources of professors and students.”

Fulbright winner Megan Shaughnessy will head to the National University of Ireland-Maynooth to earn a master’s degree in Nua-Ghaeilge, or modern Irish. Shaughnessy’s award is one of the most competitive Fulbrights because only one Irish-language award is offered.

“I became interested in the language because it is an aspect of my Irish heritage that had gone unexplored,” said Shaughnessy, “until my time at Fordham.”

As Fordham’s first Cambridge International Scholar, Mohammad Usmani will be doing research in rheumatology with an eye toward attending medical school once he earns his doctorate.