skip to main content
Return to Fordham University
You are at:Home»Faculty Profiles»Campaign Enables Fordham to Recruit Faculty of the Highest Caliber

Fordham’s reputation as a center for academic rigor has ascended to a loftier perch, thanks to an increase in the number of endowed faculty positions established since the start of Excelsior | Ever Upward | The Campaign for Fordham.

Before the campaign, the University counted 26 endowed chairs; as of September 2013, that number stands at 67, with many created through the generous investments of individual and institutional donors. These investments offer resources to attract noted scholars to the University to teach and interact with students and carry out research.

Although some of the newly established chairs have yet to be filled, the sheer number and variety of fields they encompass, from business and law to religion to the arts and sciences, are a true testament to the generosity of the Fordham family.

The following are a few chairs funded as a result of the campaign. 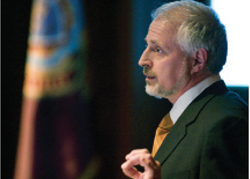 Established with a bequest created in Anastasi’s name, this chair enhances the legacy of the former Fordham professor whose book,Psychological Testing (Macmillan, 1954) is considered by many to be the definitive text in the field of testing.

Anastasi was a member of the Fordham faculty from 1947 to 1985 and chair of the Department of Psychology. In 1987, she received the National Medal of Science from President Ronald Reagan.

David V. Budescu, Ph.D., a psychologist who has researched the effects of uncertainty on human judgment and decision-making, was installed in the chair in December 2008.

Established in 2005 by Sally J. Bellet, LAW ’76, the chair was named for Bellet’s parents. Bellet’s grandfather, Louis Stein, Law ’26, in 1976 founded the Louis Stein Center for Law and Ethics at Fordham Law, which has achieved enormous success in matters related to public service and ethics.

Russell Pearce, the current holder of the chair, joined the Fordham faculty in 1990, and currently teaches, writes and lectures in the field of professional responsibility. He is also the co-director of the Stein Center. 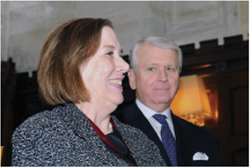 Established through a gift from James Buckman, FCRH ’66, former vice chairman of York Capital Management, and his wife, Nancy M. Buckman, this theology chair was established as a way to strengthen philosophy and theology, areas in which, James Buckman said, Jesuit universities “act as the lights of the world.”

Barbara Hilkert Andolsen, Ph.D., a feminist theologian and ethics scholar, was installed in the chair in a ceremony in February 2009.

The gift will make it possible for Fordham to hire a professor of creative writing within the Department of English. The chair will be a visiting appointment for a limited term, offered to a distinguished writer drawn from a variety of genres, to lead writing workshops and teach seminars and master classes to upper-level undergraduates or graduate students.
The first holder of the chair will be announced in the spring of 2015. 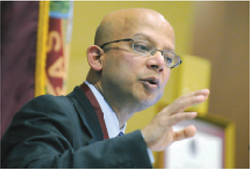 E. Gerald Corrigan, Ph.D., GSAS ’65, ’71, former president of the Federal Reserve Bank of New York and managing director at Goldman Sachs, established the chair in 2007 with a gift to increase the Graduate School of Business Administration’s (GBA) talent in global finance and economic issues. The Corrigan gift further endowed the E. Gerald Corrigan Endowed Scholarship Fund at Fordham College at Rose Hill, which has provided financial support to minority students for nearly a decade.

Iftekhar Hasan, Ph.D., whose expertise is in the areas of corporate finance, entrepreneurial finance, and capital markets, was formally installed as the inaugural holder of the chair in February 2012.

This chair was created thanks to a February 2009 gift from the Jaharis Family Foundation, Inc., a philanthropy that provides grants to arts, cultural, and religious institutions, and Mary and Michael Jaharis. It marked a milestone for Orthodox studies in the Western Hemisphere and ensured resources for a chair in this discipline in perpetuity at Fordham.

The new chair was celebrated by members of the Fordham and Orthodox Christian communities at the November 2013 installation ceremony for Aristotle Papanikolaou, Ph.D., a professor of theology and the senior fellow and co-founder of Fordham’s Orthodox Christian Studies Center. A second chair will be installed in 2015.

A gift in November 2009 from Vincent Viola, PAR, chairman of Virtu Management, LLC, and his wife, Teresa, created an endowed professorship in honor of Cardinal Dulles, who was the first American to become a cardinal who was not a bishop, and the only cardinal to teach on Fordham’s staff.

As part of his 2011 transformative $25 million gift, Mario Gabelli, GSB ’65, devoted funds toward a new faculty position that will be tasked with heading the new Gabelli Center for Global Security Analysis. 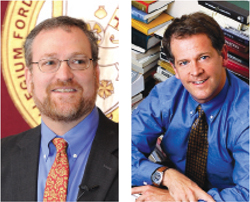 Paul Guenther, FCRH ’62, former president of the investment firm PaineWebber, and a trustee emeritus of the University, established the chair in 2008 through gifts made by him and his wife, Diane. The Guenthers were born and raised (and met) in Inwood, Manhattan, while Saul Cornell, Ph.D., the chair’s inaugural holder, was born and raised in the Coney Island area of Brooklyn.

For his inaugural address, Cornell kept the New York City connection alive with “The Perils of Popular Constitutionalism: Riding the D Train with James Madison,” which detailed the Anti-Federalists of Colonial times.

A gift from James Leitner, LAW ’82, in 2007, allowed the law school to establish two chairs in international human rights. Martin Flaherty and Thomas Lee are holders of the Leitner Chairs.

A gift from Eugene Shvidler, GBA ’92, made in February 2013 provided for the establishment of the Shvidler Chair of Judaic Studies in the Department of Theology.

Shvidler, the chairman of Millhouse LLC, an investment and asset management company, received a master’s degree in mathematics from the Gubkin Institute of Petrochemicals and Natural Gas as well as an M.B.A. and master’s degree in international taxation from Fordham’s GBA.

A search is currently under way among academics with distinguished records of research and scholarship in Rabbinic and/or later religious developments within the Jewish tradition. 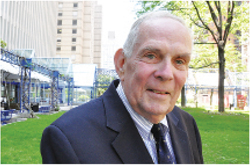 Answering the matching challenge of Mario Gabelli, William Toppeta, FCRH ’70, and his wife Debra provided the funds for this chair, which in April 2012 was awarded to James R. Lothian, Ph.D., Distinguished Professor of Finance in the Fordham Schools of Business. Toppeta is a senior advisor at Promontory Financial Group. 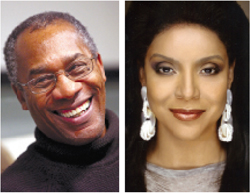 In March 2011, the contributions of Academy Award-winning actor Denzel Washington, FCLC ’77, endowed both a chair in theater and a scholarship fund for undergraduate students studying theater.

A gift from the Waxberg estate led to the creation of a chair at the Fordham School of Law in 2008 that was awarded to Joel Reidenberg, Ph.D., the founding Director of the law school’s Center on Law and Information Policy (CLIP).

Reidenberg has held numerous administrative leadership positions for Fordham University and has become a leading voice for privacy. CLIP’s most recent report detailed the ways in which schools endanger students’ privacy through connections with private data collectors.