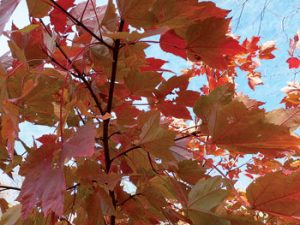 A Red Maple tree (Acer rubrum) in bloom at the Calder Center.
Photo by John Wehr

Of the sprawling 113 acres that make up the Louis Calder Biological Field Station in Armonk, N.Y., one in particular has a unique role at Fordham.

That acre has been transformed into a nursery for 75 American Elms, Red Maples, Northern Red Oaks and Japanese Maples, many of which will find permanent homes at the Rose Hill and Westchester campuses.

The project began two years ago. Preparations involved leveling the land, enriching the already fertile soil with additional compost, and erecting a perimeter fence and irrigation system. The trees, which measure 1.5 to 2.5 inches in diameter, were planted with Taxus, an evergreen shrub used as hedging throughout Rose Hill.

“The site was part of an orchard many years ago, so in a way we are bringing a little bit of history back to the area,” said Arthur Herman, director of grounds and transportation.

“We are extremely pleased with the results. The trees are thriving and showing sizeable growth,” Herman said. “In fact, we transplanted two Japanese Maples to Westchester early last fall.”

The nursery is the University’s first attempt at raising its own trees. Growing a tree is two-thirds less expensive than buying an equivalent tree from a wholesale nursery, he said.

So the next time you see a sapling at either campus, you’ll know it’s been a Fordham tree from the beginning.