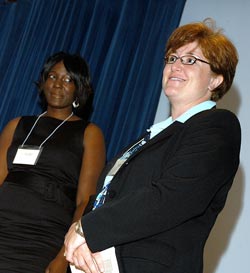 Angel Hundley, a senior at Georgia’s Fort Valley State University, always wanted to be a dentist. But that was before she spent the summer studying fungi as part of Fordham University’s Calder Summer Undergraduate Research (CSUR) Program.

“I want to go into research and work in molecular biology,” the 21-year-old said at an Aug. 16 symposium held at Flom Auditorium in the Walsh Family Library on the Rose Hill campus, where she and fellow program participants presented their research. “This was an opportunity of a lifetime and I’m grateful that I got to do it.”

Hundley was one of nine students from across the country who participated in the 12-week program, which has been held at the Calder Center since 1998. The symposium was the culminating experience for the students and featured a keynote address by Sarwan Dhir, Ph.D., program director of the Center for Biotechnology at Fort Valley State University.

As part of the program, students conduct research at sites at the station and nearby ecosystems, such as the Hudson River, the Catskill Mountains and Black Rock Forest, under the mentorship of Fordham ecology faculty members.

Typically, the program attracts students from “undergraduate colleges with smaller research programs and from groups under-represented in science,” said John Wehr, Ph.D., associate professor of biological sciences and director of the Calder Center. And the experience, he said, can have a powerful effect on their view of science and career possibilities.

“Instead of being told about science,” Wehr said, “they do science.”

This year’s group hailed from a variety of institutions, such as Texas A&M University in College Station, Tex., and Medgar Evers College in Brooklyn, N.Y. Hundley was one of two students from Fort Valley State, a historically black college that has sent 10 students to the Calder program over the years.

“I had a chance to study something I knew absolutely nothing about,” Hundley said of her research in which she used molecular tools to characterize an ectomycorrhizal fungal community from soils in Black Rock Forest in Cornwall, N.Y.

The program costs the students nothing, thanks to a National Science Foundation grant awarded in 2006 to Wehr and James Lewis, Ph.D., associate professor of biology.

“Most of the funds go toward student stipends, travel and other student support,” Wehr said of the $324,471 four-year grant. “A small proportion pays for research supplies, although the mentors usually need to provide additional funds to support their student’s research.

“We’re fortunate to have a very dedicated and collaborative group of faculty scientists at the Calder Center,” he said.