skip to main content
Return to Fordham University
You are at:Home»Inside Fordham»Calder Center Biologist Seeks Out Secrets of Fungi to Benefit Ecosystems 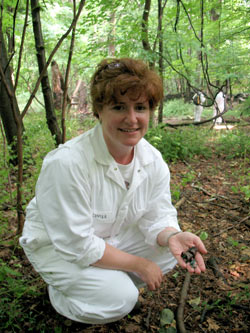 As a graduate student, Amy Tuininga, Ph.D., assistant professor of biology, developed her strongest interest in studying fungi that are decomposers—consumers of dead plants and animals. However, when a job opened up studying ectomycorrhizal fungi (known as “good fungi,” or mutualists, which provide nutrients in exchange for carbon), she took the job even though she wasn’t that enthusiastic.

“The woman who was giving me the culture collection to care for told me, ‘These are beautiful fungi, you’ll love them,’” Tuininga said. “And I thought to myself, ‘Yeah, right! Beautiful. Whatever. I’ll just do the job.’”

But when Tuininga started working with them, she found herself dazzled by the vibrant yellows, pinks and blues, and the organic netlike patterns that she could see under the microscope.

“They really are beautiful,” she said with a laugh. “Now I’m the one promoting them.”

For Tuininga, their real beauty, however, lies in their function. As a fungal ecologist at Fordham University’s Louis Calder Center Biological Field Station, Tuininga researches the effects of fungi on plants and insects, and their overall value within ecosystems. Among some of the things she has investigated are:

• how these “good” fungi respond to a natural wildfire and how they shift their functions, helping to heal the damaged environment in the process;

• how emissions of fossil fuels affect “good” fungi, and how those fungi that can withstand high levels of pollution can predict a forest in decline;

• how the Hemlock woolly insect, which defoliates the Eastern Hemlock trees, affects the “good” fungi, and how the fungi might feedback to help control forest recovery;

• and which types of mitosporic (asexual, spore-producing) fungi in the soil can kill black-legged ticks, and how pesticide companies might use such fungi to create more biologically friendly controlling agents.

The power of fungi, Tuininga said, is untapped and they are important components in most ecological systems. Fungi, for example, can connect different plant species to each other through a vast underground network.

Such underground webs, she said, offer huge benefits for above ground plants by supporting seedlings with nutrients until they can grow big enough to reach a spot of sunlight.

“We have only identified about 80,000 species of fungi,” she said. “But it is estimated that there are 1.5 million species on the planet. We know of about 5 percent—what are those other 95 percent doing? Most likely, they’re doing really important things.”

Tuininga’s work frequently takes her into the field. Recently, she accompanied two students into the Calder Center’s 113-acre forest to supervise their collection of soil samples. While her students bagged and labeled the samples, Tuininga pointed out various invasive plants and animals, including a pebbly patch of earthworm residue and heaps of poison ivy. Such invasive species, she said, tend to show up on the edge of forests near large metropolitan areas, due to increased human activity.

Another problem for ecosystems in close proximity to metropolitan areas is an abundance of fossil fuels. One study that Tuininga participated in measured the effect of nitrogen pollution on fungi in both highly populated areas in and around New York City and in more rural areas. The study’s findings, she said, were used by lawyers for the State of New Jersey who filed suit against a power plant for increasing its coal emissions in violation of the federal Clean Air Act.

“As scientists, we don’t generate policy per se, but we make information available, putting it out there in a way that can be used by policymakers,” she said. “Our results are not collected to support a particular agenda. We just report what we find.”

“A lot of the [fungal]species are very sensitive to human activities,” she said. “We may be losing a lot of our biodiversity and not even know what functions are performed by some of those species. And 100 years down the road, it will be too late.”