skip to main content
Return to Fordham University
You are at:Home»Inside Fordham»By Every Measure, CSTEP Grads Make the Grade 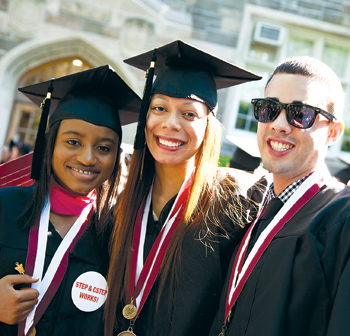 Graduates Asmaou Diallo, left, Amaidani Boncenor, center and Angel Melendez, said their success is due in part to the support of Fordham’s CSTEP program.
Photo by Kathryn Gamble

Several students in the University’s Collegiate Science and Technology Entry Program (CSTEP) have earned prestigious awards in their chosen fields. In the past three years, in fact, 12 Fordham CSTEP students have been accepted to medical, dental or optometry school; seven to law school; three to allied health programs; and four to graduate programs in chemistry. Fordham’s program is one of the largest and most successful in the state.

“I don’t know how far I would have made it without CSTEP. I come to the office for everything,” said Carlisdania Mendoza, FCLC ’12, a Dominican native who was raised by a single mother in the Bronx. Mendoza, who will be attending Duke University School of Medicine in the fall with a scholarship, said CSTEP was “like a family away from home.”

She was one of about 200 CSTEP students on the Rose Hill and Lincoln Center campuses who rely on the state-run program for academic and social support each year. CSTEP helps students secure coveted—and paid—internships and research assistantships; provides free tutoring for challenging classes like organic chemistry; and offers crucial guidance in the graduate school application process, including free test-prep classes for MCATs and other entrance exams.

“We’re trying to make Fordham a substantial producer of minority students pursuing careers in health and the physical and natural sciences,” said Michael Molina, director of Fordham’s CSTEP program for its entire 25 years. Citing the high pre-med drop-off rate, Molina said extra support is critical for his students, many of whom are the first in their families to attend college. “We want them to know what they’re in store for.”

Pre-med student Asmaou Diallo, FCRH ’12, discovered her great passion for research while at Fordham. “You give me one molecule, I can spend my life on it,” she said. She spent her summers completing prestigious research internships, including one at the Yale University School of Medicine, which CSTEP helped her secure.

But Diallo had some health problems that threatened to sideline her college career. A victim of female genital mutilation in her native Guinea, the normally upbeat young woman suffers with chronic pain that became so intense that it forced her to take a semester off. CSTEP supported her during that ordeal, referring her for counseling and even paying for her yoga classes, which have helped her manage her pain. She also found solace in her Muslim faith, which has led her to pursue a master’s degree in Islamic studies. She will attend Hartford Seminary on full scholarship this fall and plans to attend medical school when she graduates.

Research has opened doors for many CSTEP students, including Haitian native David Marcelin, who has been accepted to a joint degree program with Columbia School of Engineering and Applied Sciences. He also received the 2012 UNCF/Merck Undergraduate Science Research Scholarship Award, which includes up to $25,000 toward tuition, room and board and a summer internship at Merck.

CSTEP also supports students interested in law and other licensed social science professions. Soon-to-be CUNY law school student Angel Melendez, FCRH ’12, has deferred his acceptance for a year to join the competitive City Year program, where he will work to lower the dropout rate in urban public schools.

Melendez is joined by two of his classmates in securing public-policy fellowships for the coming year. Patrice Edwards, FCRH ’12, will join the Coro Fellows Program in Public Affairs, which received 600 applicants nationally for 64 spots. CSTEP helped Edwards apply and is paying part of her tuition.

CSTEP also helped Reynold Graham, FCRH ’12, secure a spot in the NYC Urban Fellows program, which will grant him a stipend of $30,000 and place the social-justice-oriented graduate with a New York City agency for nine months beginning this fall. “I don’t know how I would have even applied without CSTEP,” he said.