skip to main content
Return to Fordham University
You are at:Home»Inside Fordham»Business Studies Open the Door to the World for CBA Student 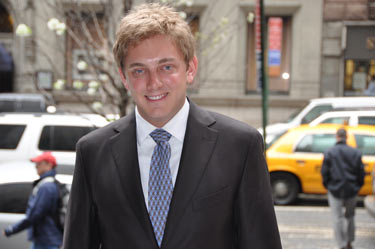 It was in backcountry China that Jacob Jordan got some of the most profound lessons of his Fordham career.

He was studying in Beijing through Loyola University Chicago, along with dozens of other students from Jesuit colleges and universities, in a program that required travel and service in remote parts of the country.

The students stayed for days at a time among minority communities living in huts, where even Mandarin may have sounded foreign, where there was no currency, and where no one spoke a word of English.

It was a fascinating cross-cultural experience, and also “a great example of just how vast the Jesuit philosophy of education is,” Jordan said. “You went on these trips, you understood the culture, you tried to help people. It wasn’t something that they encouraged you to do, it was something they required you to do.”

As he graduates from the College of Business Administration with a major in public accounting and moves on to a two-year training program with JPMorgan Chase, Jordan is looking forward to a career that spans international boundaries.

His resume lists CBA’s G.L.O.B.E. program and Mandarin and French language ability, along with experience at the United Nations. That’s where he and other students, as part of the Fordham University Consulting Group, devised recommendations for ensuring companies’ compliance with the business practices required under the U.N. Global Compact.

Mandarin courses caught his eye when he first visited Fordham from Fort Smith, Ark. When he enrolled at Fordham, he found his interest in foreign travel was encouraged. “Fordham certainly shed the light on it, and opened the door,” he said.

In China, he glimpsed cultural differences, such as the importance of personal relationships in business dealings. But the trip also deepened his interest in finance because he saw how it underlies the interests of people everywhere.

“Finance is a part of everything,” he said. “It was an eye-opening experience to just realize that you’re in about as opposite a corner of the globe as you could be, and … these people have the same wants and the same needs and the same sort of interests that you do.”

He is optimistic that the current tumult in the financial world will lead to more responsible, more ethical business practices, and that his generation will be responsible for setting a better course.

On a recent afternoon, he was busy adding another item to his long list of academic pursuits. He was taking a prep class for the GMAT so he can take the exam while he’s still immersed in the academic world. He would like to get an advanced degree eventually, and can see himself returning to Fordham to teach.

He also hopes to live in China one day, and looks forward to working in the global economy. “Fortunately, for our generation, travel’s going to be a big part of work,” he said.