skip to main content
Return to Fordham University
You are at:Home»Colleges and Schools»Gabelli School of Business»Business Students’ Ideas are Smokin’

When the curtain rose for the off-Broadway play The Last Smoker in America on Aug. 2 at Manhattan’s Westside Theatre, a select Fordham group was more familiar with the show than most. 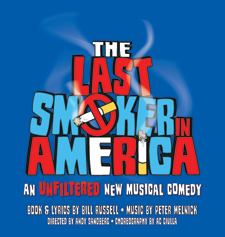 Students from the Gabelli School of Business helped promote the off-Broadway show, The Last Smoker In America, this summer.
Courtesy of Joan Marcus

“I am so proud of our students. They always rise to the occasion, and in this case they did just did that,” said Janet DiLorenzo, Ed.D., lecturer of marketing in the Fordham Schools of Business.

In past years students in the class have consulted for groups such as the Hunger Project, The Point, and St. Barnabas Hospital. This was the first time they consulted for an off-Broadway production.

As part of the five-week course, the students met for two hours with the show’s director and producer, Andy Sandberg, whose revival of the Broadway show Hairearned a Tony award in 2009. They were also invited to sit in on rehearsals for the play, a one-act musical set during a time when smoking is illegal.

Challenges to building an audience were twofold: first, tourists have myriad choices when it comes to plays to see; and, secondly, the average theatergoer is a woman between 40 and 70, which made it hard to lure the 18-to-24-year-old market.

Sandberg described the show as being “very timely and relevant, and about so much more than just smoking.” He said the student marketing group, which included Rosen Toshev, Alejandra de Lecea, Cara McGonigle, Daniel Parker, and Hearim Bae, offered “really valuable insights into what might appeal to younger audiences, particularly students.”

“What was most intriguing about the students was that not all were theater fans, so they were able to look at the market objectively as they tried to identify what might make this show appealing to nontraditional theatergoers,” he said.

Toshev, a transfer student from the University of London, said that among the advertising tactics they recommended was using flash mobs in crowded areas, such as Times Square and Edwards Parade.

“We also suggested [using]cigarette girls to hand out flyers in Manhattan, an iPhone app that scans barcodes on flyers and provides information about the play, and a Fordham alumni event to attend the play and meet Andy Sandberg,” he said.

The class’ final product of nearly 75 slides featured some pricing schemes to augment promotions—such as $30 tickets for persons under 30. DiLorenzo said it was a great example of teamwork.

“We were dealing with this amazing Tony award-winning director/producer, an off-Broadway play, and [a chance for]the students to really be quite instrumental in marketing decision making,” she said.