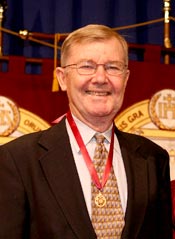 The late Walter F. O’Connor, Ph.D., at the University Convcation in March where he received a Bene Merenti Medal for his 20 years of service.
Photo by Michael Dames

Walter F. O’Connor, Ph.D., professor of business, died on Aug. 24, at his home in New Jersey. He is survived by his wife, Marie O’Connor, and three children, James, Jeannie and Walter Jr.

“His enthusiasm for Fordham and his honest, no-nonsense approach to life earned him respect within the academic and professional worlds,” the deans said. “He will be missed greatly throughout our Fordham community. We mourn the loss of such a strong pillar of our school, and we hope you will join us in sending the warmest support to his family.”

O’Connor served as vice chairman and international member of the board of directors at KPMG Peat Marwick before coming to Fordham in 1987. At Fordham, he served as a professor of accounting and taxation and director of the master’s program in taxation. In March, the University awarded him a Bene Merenti Medal for 20 years of service to the institution.

Highly regarded in the field as an expert in international taxation and mergers, he was the author of the textbook Accounting and Taxation (Barron’s Educational Series, 1990), served as editor-in-chief of The International Tax Journal, and was on the editorial board of The CPA Journal. He was a certified public accountant in the states of New York, New Jersey, Michigan, Georgia and Louisiana.

O’Connor received his bachelor’s degree from St. Peter’s College, an M.B.A. from New York University and a doctorate from the City University of New York.