For every style of communication and decision-making available to people, there are plenty of obstacles to their effectiveness, especially when it comes to teams working on projects. 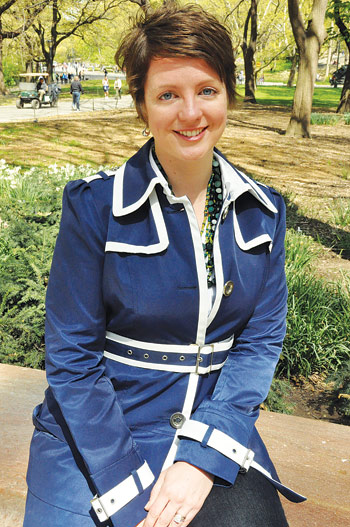 Meghann L. Drury, Ph.D., assistant professor of communications and media management in the Fordham Schools of Business, is devoted to identifying and finding solutions to those obstacles.

In the waterfall approach, a project manager leads a team of experts through rigidly timed phases of planning, building, testing and implementing a piece of software for a client. Often, a finished product isn’t delivered until after a year’s time.

Instead of having one section doing development and another doing testing, the developers and testers collaborate on one small team. Instead of figuring out requirements for the customer for the first eight weeks of the project, the team figures out requirements as the project goes along.

“They basically take a project management approach of ‘plan for two months, develop for another six months, test for two months and implement for three months,’—and do all of that in two-week cycles,” said Drury.

One advantage of this approach is that the team is able to constantly adjust to the evolving needs of the client—an important aspect, given how fast technology needs change.

It also empowers junior members on the team, who might make up for their lack of experience with creativity.

Drury became well acquainted with team projects when she took time off, after earning her doctorate, to work for Deloitte Consulting, LLP. She revisited the topic when she came to Fordham, and found the Agile method still has issues that need to be addressed.

“You have all of these levels of experience coming together, which creates a more egalitarian, participatory environment, but there’s still a hesitancy on the part of junior members that they can actually contribute to the decision-making,” she said.

“One of the challenges is, how do you create an environment where they’re allowed to make decisions, but also have those decisions fail and learn from them, when you know you have a client at the end of those two weeks demanding something be delivered to them?”

There is also a question of how well Agile works for companies that rely on team members who are spread across the globe. To work faster, Agile teams typically document a lot less of their work, forgoing reams of documents generated over months of research.

Many teams work with old-fashioned white boards and Post-It notes. This works when an entire team is physically connected for the entire project, although it is not as economically attractive as “distributed teams” that rely on outsourced expertise from places such as India.

“You can compensate with mediated communication like webinars and Skype calls,” she said. “But for all of our technology, you cannot replace face-to-face interaction.

“You miss a lot of non-verbal cues: tone of voice, your facial expressions, posture, eye contact, all of those items are communicating things. So, distributed teams can be another obstacle to decision-making—whether they are an Agile team or not.”

That same dependency on global partnerships also presents cultural challenges to decision making; this is an area that Drury, who has lived and worked in Galway, Ireland, will be pursuing in future research.

Team dynamics certainly have an impact too.

Drury said the possibilities in this new research are exciting, because they show how decision-making and communication are relevant to many different fields. Virtually every major company in the United States is now working with partners overseas, and cultural differences are impossible to ignore.

Throw into this mix a chaotic world economy that shows little sign of calming down soon, and you have a real need for expertise in communication during times of change, she said.

“Economies are up and down, there’s a lot of uncertainty globally about financial markets and debts that countries owe, and all of that creates a lot of change for companies,” she said.

“How we deal with that change, and how we communicate with our peers and supervisors about those situations, has ramifications on the decisions we make.

“For the most part, we’re all faced with making decisions with a lot of uncertainty.”