skip to main content
Return to Fordham University
You are at:Home»Inside Fordham»Business Coaching from a Pro 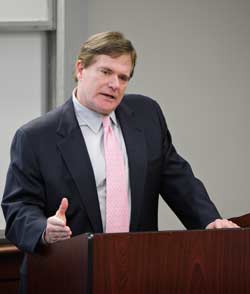 TD Ameritrade CEO Joe Moglia discussed the evolution of the online brokerage industry with students in an equity analysis class at the Graduate School of Business Administration on Jan. 29.

Since becoming CEO in 2001, Moglia has led the Omaha, Nebraska-based company through nine mergers and acquisitions, including a $2.9 billion deal with TD Waterhouse in 2006. But the industry’s current era of consolidation, he said, is “coming to an end. As the valuations go up, the risk-reward becomes that much more significant.”

Moglia, who earned a bachelor’s degree in economics from Fordham in 1971, enjoyed a 16-year career as a football coach before joining Merrill Lynch in 1984. He gave students signed copies of his book, Coach Yourself to Success: Winning the Investment Game (Wiley, 2005), and told them that one key to success, in athletics and business, is honestly assessing your strengths and weaknesses.