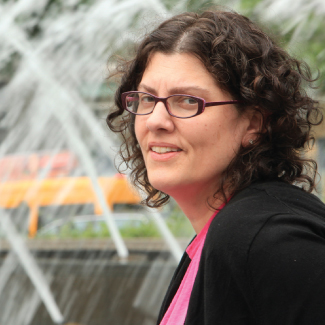 “If you strip away the pieces of fundraising that are industry specific, at the end of the day it boils down to how well you communicate what you are doing,” said Lauri Goldkind, Ph.D., assistant professor in the Graduate School of Social Service (GSS). “If can’t communicate why your program is special, then it is sunk.”

Communications, public relations, and fundraising have become an integral component of executive leadership at human services organizations (HSOs). In his final lecture at Fordham as dean of GSS, Peter Vaughan, Ph.D., reiterated the need for leaders to sharpen their communication skills.

“Simply put, we are challenged by bad press,” he said.

The field’s relatively recent emphasis on communication takes place amid an increasingly competitive race for philanthropic dollars and a revolution in communications, particularly as it relates to social media. Goldkind’s most recent scholarship hones in on how executives utilize social media to change policy and raise money.

To conduct the study, Goldkind received a faculty research grant from the University, which eventually led to a two-year grant from the Kresge Foundation in partnership with the Center for Philanthropy at Indiana University. Both organizations are interested in civic engagement issues. In order to understand how human service organizations use electronic media to promote policy change and raise funds, Goldkind surveyed 260 human service organizations and collected data from 25 executive leaders.

In her project summery, Goldkind wrote that HSOs have been slow to adapt to technological advances, yet increasingly an organization’s survival depends on a leader’s ability to adapt to evolving technological strategies.

Even though the data is still being analyzed, a few trends have emerged on how effective electronic outreach works. Goldkind has found that the way leaders think about social media dictates how efficiently it gets used and that the most successful executives delegate their social media profile. Successful use of Twitter alone requires constant use, which requires time your average HSO director does not have. To properly exploit the media, executives must hand over their “voice” to someone else.

Goldkind cited one of the more sophisticated media users from her survey who told her that while he prioritizes high-quality writing, if he wanted his staff to fully engage with the agency’s constituency, then he needed “to loosen the reigns a little bit.”

Another communication challenge facing HSO executives is that their constituencies may not necessarily relate to them. In a soon-to-be-published article in Advances in Social Work, titled “Social Workers as Senior Executives: Does Academic Training Dictate Leadership Style,” Goldkind cited literature that found that 82 percent of the nonprofit executive directors were white, even though the organizations primarily serve people of color.

Further distancing HSO executives from the people they serve is that when leadership positions need to be filled, business experience often trumps on-the-ground experience.

“The perception among people who are hiring those leaders is that social workers don’t have the financial chops to run organizations,” said Goldkind.

Nevertheless, Goldkind found only marginal differences between social workers and leaders from different disciplines; yet few make it to the boardroom. Despite the lack of advancement, Goldkind said that academic training often skews toward clinical roles rather than administrative.

There remains a schism within the profession, she said, with many social workers skeptical of the emphasis on leadership and philanthropy. Most students come to the profession with a sense of mission, seeing themselves as hands-on social workers rather than administrators.
“If social work is about change, then we need to move away from an individual-level change model to an agency change, to a community change, and expand the scope of what that change should look like,” she said.

Goldkind argued that today’s social work student should leave the university understanding how to recruit and retain talent, how financial resources flow through an agency, how to evaluate their program, how to write grants, and how to fundraise.

The tide may be changing, however. Goldkind’s course, Leadership and Macro Practice, has been filled, and GSS has partnered with the Graduate School of Business Administration to offer a master of science in nonprofit leadership.