skip to main content
Return to Fordham University
You are at:Home»Inside Fordham»Borough President Says Education will Lift the Bronx 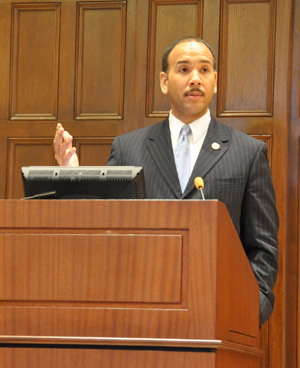 Bronx Borough President Ruben Diaz Jr. said in an appearance on the Rose Hill campus that better education can link Bronx residents to the world-class institutions that call the borough home.

The second address in the Graduate School of Education’s Borough President Speakers Series brought Diaz to Keating First Auditorium. He declared that he would push hard to reduce the chronic problem of poverty in the Bronx.

“You have to ask yourself, ‘Why is this the case, when the infrastructure in the Bronx is far superior to other urban areas at the top of the list of poverty rates?’” he said.

In particular, he cited top-flight medical and educational institutions including Fordham, Albert Einstein College of Medicine and Montefiore Medical Center.

“There’s so much potential and we’ve come such a long way, but if we want to address the issue of poverty and unemployment rates, then we have to start creating jobs. We have to make sure people who are developing in the Bronx do so by employing Bronxites and also by hiring and using Bronx businesses as vendors and subcontractors in their developments,” he said.

“But we can’t begin to have that conversation unless we start to address education, and unless we really start to look at dropout rates.”

The borough has a long way to go, he said. Diaz noted that of 13,500 eighth graders in the Bronx who graduated last June, only 334 were admitted to prestigious high schools in the borough such as the Bronx High School of Science. In fact, he said, that school has only 50 Bronx residents enrolled there.

“I don’t understand how we’re not equipping our kids so they can benefit from the quality of those specialized schools,” he said.

When asked by a student what he would do to encourage parents to get more involved, he said the Department of Education needed to do more to give them the right tools.

“When parents go to meetings, nobody gives them adequate information on the school funding formula, on what’s happening with the school building, what’s going to happen next year or capital funding,” he said.