skip to main content
Return to Fordham University
You are at:Home»Inside Fordham»Blessed Virgin’s Dedication to God and Child Influenced Many, Scholar Says 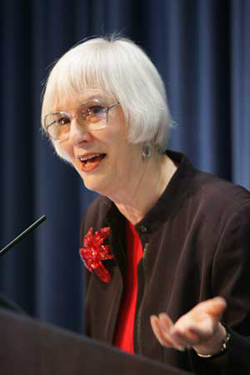 Though women were regarded as vulnerable, and even unruly, throughout early modern Catholicism, the Blessed Virgin Mary stood out as a potent symbol, according to a scholar who spoke on April 14 at Fordham.

“The Virgin was regarded as the opposite of her misbehaving sisters,” said Susan C. Karant-Nunn, Ph.D., director of late medieval and reformation studies at the University of Arizona.

Nunn, who delivered the St. Robert Southwell, S.J., Lecture, titled, “The Virgin’s Tears: Continuities in Early Modern Catholicism,” said sermons about Mary and the Passion in the 16th century left a profound influence on women, religious life and Catholic identity.

“Throughout the Middle Ages, emotionality was associated with femininity,” she explained. “For example, Adam was more clever than Eve, who was vulnerable and easily led astray. She required the supervision of her spouse, by most accounts.”

Karant-Nunn said art illustrated this belief, pointing to a painting called The Fall of Man, which depicts the serpent as another woman whispering in Eve’s ear.

“When women get together to chat, bad things happen,” Karant-Nunn said.

Mary was exempt, however.

“Medieval Christians used Mary to address a variety of problems, embellishing the Biblical attributes of her role in salvation, her virginity and her maternity,” Nunn said.
“Jesus was the son of God but also the son of the spotless maid, Mary.”

Medieval preachers had fantastic elaborations about her traits in their sermons, Karant-Nunn said.

“Above all of Mary’s traits stands her dedication to her God and child,” she said, referring to Mary’s actions in the Passion. “Mary empathizes with him. Only Christ’s suffering could’ve surpassed that of her own.”

One of the world’s premier scholars of the history and culture of early modern Catholicism in Germany, Karant-Nunn is professor of history and author of four books, including, The Reformation of Ritual (Routledge, 1997), winner of the prestigious Roland H. Bainton Book Prize in History and Theology. She has written more than 50 articles and is the North American co-editor of the international journal Archive for Reformation History.