skip to main content
Return to Fordham University
You are at:Home»Inside Fordham»Biology Student ‘Made Time’ to Make Most of Life at Marymount 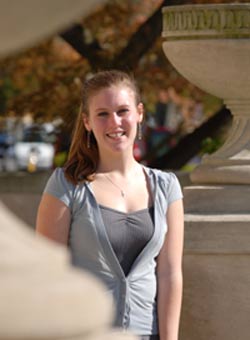 To say that Erica Mirigliani, a senior at Marymount College of Fordham University, was busy during her time at the University would be an understatement. In addition to her studies as a biology major, she found time to serve in student government, work as a resident assistant, captain the soccer team and help organize trips for Global Outreach. She even plays guitar and percussion every Sunday at Mass.

How does a student find the time for all these activities? Simply put, she made time.

“Something will always catch my eye or spark my interest,” said Mirigliani, who is also president of her graduating class this year. “I just really like to be involved, to do new things. I don’t really master one thing, but I get really interested in a lot of things.

“I don’t sleep too much,” she said jokingly, “but I just really wanted to make the most of my time here.”

Mirigliani, who grew up in Wilkes-Barre, Pa., loved her four active years at Marymount. She plans to attend medical school in fall 2009, and hopes that her career in medicine will offer her the opportunity to promote social change, a desire that was nurtured at the University.

“The volunteer opportunities here, especially with Global Outreach, really put the idea in me that I wanted to do a lot of service with my medical career,” she said.

In fact, nothing might have shaped her outlook on life more than Global Outreach. After graduation, Mirigliani will be part of a Global Outreach contingent headed to the Dominican Republic. Last year, the organization visited New Orleans, which was ravaged by the effects of Hurricane Katrina.

The trip changed Mirigliani’s life and her outlook on her own volunteerism.

“It’s really hard to put into words,” she said of the experience. “It opened my eyes. I was on a volunteer kick, I wanted to travel, to help people in other countries, but that trip really showed me that there is so much I can do domestically. The United States has a lot of underserved areas.”
At Fordham, Mirigliani said she learned to be prepared to deal with the unexpected, because life can change at the drop of a hat. “You develop plans and goals for yourself, and you see your life going in one direction and then it can take another turn—and that’s OK,” she said. “It doesn’t mean that you can’t still pursue what you really want.”

One thing Mirigliani did not expect when she first stepped onto the Marymount campus four years ago was the kind of person she would become.

“I underwent a great deal of personal growth here, and I never expected that,” she said. “I’m just really thankful that I ended up at Marymount.”