In the video above, Kolokotronis discusses the evolution of bedbugs and why pesticide-resistant bedbugs hold very big implications for the health and welfare of the city. 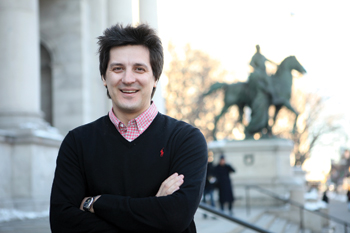 “If I were to guess which commuting pathway would be the most microbiologically diverse in New York City, I would say it’s the No. 7 train going through Queens,” said Sergios-Orestis Kolokotronis, Ph.D., assistant professor in the Department of Biological Sciences. “Queens is the most multiethnic borough, so I would expect diverse people with diverse cultures, habits and food preferences to contribute a rainbow of microbial profiles to New York City’s microbial orchestra. Not to mention that the 7 train stops at Grand Central Terminal, one of the major transportation hubs in the Northeastern United States.”

Kolokotronis’s area of expertise is in evolutionary biology, with a particular focus on endangered species and microbes. Lately he has become interested in the microbes of New York City—whether they live on surfaces such as subway seats, park benches, and handrails; in parks or rivers; or on the city’s birds, rodents, and invertebrates. He collaborates with biologists at other universities and medical schools to understand the bacteria New Yorkers come in contact with on a daily basis—about which, he said, there is surprisingly little data.

“I use a variety of methods based on molecular biology to study the evolution of species through time and space,” he said.

But it’s not just pathogens such as tuberculosis and staphylococcus that capture Kolokotronis’s attention. RNA viruses fall under his microscope, too. He also studies a wide variety of organisms, from endangered species in the pet trade, to species that we eat, to species that feast on us—like bedbugs.

Queens presents a “very localized yet multidimensional challenge” to researchers like himself not just because of the multiple origins and habits of the people living there, but because they also happen to live between two of the world’s busiest airports, where microbes from all over the globe find their way into the country. Such microbial diversity is not always a bad thing.

“New York City is good system for microbial ecology research because we can study what it means to be in a diverse system,” he said. “We tend to associate microbes with pathogens, but only a small proportion of microbes cause disease.”

In fact, it is to our advantage to have a rich diversity of microbes on and in our bodies rather than kill off the vast majority through excessive use of antibiotics, he said. While cleaning with bleach, for example, can kill harmful microbes, it also destroys 99 percent of the microbes that are considered good or just not bad.

And while kayaking in the Gowanus Canal (as do some of his Brooklyn neighbors) is not something he’d recommend, he is collecting samples from the canal’s famously murky waters and its rich sludge for a study aimed at uncovering microbial diversity in extreme urban environments. He is studying both the canal and Newtown Creek, which straddles the Brooklyn-Queens border.

The two water bodies have served as dumps since the onset of the Industrial Revolution up through the 1970s and contain high concentrations of heavy metals and other contaminants. Today, they are still receiving raw sewage overflow that leads to a distinct bacterial presence that differs from that of the comparatively clean Hudson River.

“The main question I’m trying to ask is what kind of microbial organisms live in, and how do they adapt to, these kinds of extreme environments?” he said.

Thus, species adaptability, in the most Darwinian sense, remains the primary focus of Kolokotronis’s work. Whether it’s antibiotic-resistant bacteria, pesticide-resistant bedbugs, or pollution-resistant organisms, these survivors hold very big implications for the health and welfare of the city, he said.

And while the hand of man certainly plays a role in antibiotic resistance, resistance also exists in nature. Kolokotronis said that another part of his research is to pinpoint where human causation starts.

“If I were to take a soil sample and extract bacteria from the soil, I could find mutations that are resistant to antibiotics,” he said. “That doesn’t mean that the mutations start from there, but such a presence can help establish the point that antibiotic resistance is not exclusively human-caused.”

Nevertheless, a good portion of the resistance is caused by excessive use of antibiotics, which drives and accelerates the process of natural selection and allows the best-fit bacteria to survive.

“That one out of a thousand that we can’t kill with an antibiotic will be resistant and faces the evolutionary potential of becoming a superbug,” he said.

“We are facing climate change, global warming, and more,” he said. “Ecologically, it is better to be accepting of diversity.”

“Of course, I’m not promoting the eating of dirt from the New York pavement.”