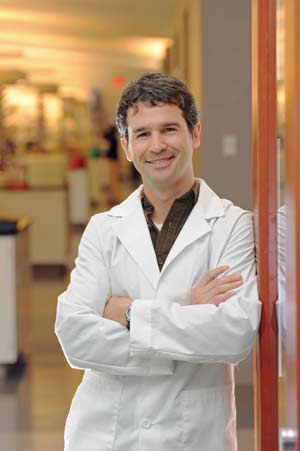 Steven Franks, Ph.D., is calling for the creation of a seed bank of natural plant populations to measure their evolutionary responses.
Photo by Chris Taggart

Steven Franks, Ph.D., will tell you that what’s bad about those irrepressible weeds in your garden is good from a scientific standpoint: The fact that they grow so quickly.

Franks, assistant professor of biology, studies certain weeds for that very reason. As a specialist in plant ecology and evolution, Franks studies how evolutionary processes work on natural populations of plants. The faster a plant grows in the wild, Franks explained, the quicker it adapts to environmental changes such as drought, shorter growing seasons, or increases in carbon dioxide in the air. Which makes weeds, in this day and age, an invaluable indicator of how plant populations may fare in the future.

“Evolution was previously thought to be a very slow process, taking millions of years to happen,” Franks said. “But we now know, and our research demonstrates, that we can watch evolution happen before our eyes.”

Frank and his fellow researchers documented their seven-year study of the invasive field mustard plant,Brassica rapa, in a 2007 article in theProceedings of the National Academy of Sciences. In California, the scientists gathered seed samples from the plant in 1997 and collected more samples from their descendants in 2004. The ancestral and descendant plants were then grown side-by-side in controlled conditions to measure if the plants—separated by seven generations—had adapted to California’s increasing drought conditions.

The results showed that the 2004 plants, the youngsters, had evolved to flower and spill their seeds some 8.5 days earlier each year than their 1997 descendants. The earlier seeding time, Franks explained, gave the youngsters a better chance at survival in a changing climate.

“The plants evolved so that they could finish their reproduction before they ran out of water,” Franks said. At the same time, each new generation of plants passed the early flowering gene on to the next generation, and so on.

The upshot of this, Franks explained, is that longer-growing plants face an uphill fight against weeds.

“Evolution is not going to rescue all species from the ravages of climate change,” Franks said. “Species that are more long-growing might not be able to evolve as fast as our weedy mustard plant, and there are many other limitations on evolution.” One such limitation, he said, might be sudden sea-level rises caused by global warming—events that potentially could cause a mass extinction of certain plant species.

Leading scientists, such as Harvard biologist Edward O. Wilson, Ph.D., predict that humankind’s present course will lead to the extinction of half of all plant and animal species by the year 2100. The potential loss of diversity is of such concern that some scientists have proposed a “Noah’s Ark” of seeds for potentially extinct species. Franks and his colleagues recently proposed a related but distinct project called the “Resurrection Initiative.”

In the October 2008 issue of BioScience, Franks and six colleagues from universities around the nation called for the creation of a seed bank of natural plant populations—not for the purposes of saving extinct species, but for the purposes of measuring evolutionary responses in generations of plants. The idea would be to collect generations of plants to compare their evolution.

“By storing these seeds now, we will be able to look back on the genes of the past and see how they have evolved following changes in climate,” Franks said. “It’s a priceless opportunity to . . . enrich our understanding of how evolution works, and to answer questions about genetics and evolution that we have not yet dreamed of.”

At Fordham, Franks has been tapped to help develop collaborative biology research opportunities between the university and the New York Botanical Garden. The two parties entered into a historic agreement that enables the institutions to share research facilities and faculty expertise. On any given day, Franks can be found doing research with undergraduate and graduate students in the Pfizer Research Plant Laboratory located in the Botanical Garden. The state-of-the-art laboratory, which opened in 2006, has given Franks the opportunity to go beyond phenotypic (traits we can see) research to molecular level research. With the mustard plant, Franks is now extracting and sequencing its DNA.

“Genetics is one of the major tools to study evolution,” Franks said. “Once we determined that an ancestor population of plants flowers earlier than its descendants, what we are doing now is measuring how much exchange of genes has been seen between [these]two populations.”

But genetics can only be so effective in understanding and protecting plant species. Scientists would be far better, Franks said, working to curb climate change than trying to “genetically engineer their way out of this crisis.”

What is certain is that the collaboration between Fordham and the Botanical Garden will lead to a stronger science program and more opportunity for undergraduate and graduate students to do cutting-edge research on these very issues, said Franks. The Department of Biological Sciences, in fact, has recently expanded its offerings by initiating an advanced certificate in conservation biology, scheduled for fall 2009.

“Across the board, there will be a lot of advantage for students from Fordham who have the chance to work over here,” Franks said.