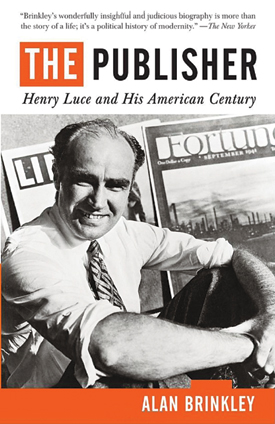 “It is not purely coincidence that I chose a journalist for this biography, since my father, my mother and both my brothers have been journalists.”

Brinkley, former provost and current Allan Nevins Professor of American History at Columbia, is the author of the Pulitzer Prize finalist The Publisher: Henry Luce and His American Century (Knopf, 2010). It chronicles the professional endeavors and personal struggles of the media tycoon who also published Life, Fortune and Sports Illustratedmagazines.

“It drew me into Luce’s own complicated life, in which he thought and wrote about China, Vietnam, Korea, communism, the Republican party—and perhaps most of all, World War II and the events leading up to it. Not to mention, of course, his renowned wife—Clare Boothe Luce—and their turbulent marriage,” Brinkley said.

He describes Luce as an entrepreneur who did not chiefly strive for personal and financial success, but who rather sought “to use his power to shape the character of the nation.” With his magazines as a vehicle for this mission, Luce worked to promote internationalism and Republican ideals during the mid-20th century.

“It was a great challenge to learn about so many areas of American and international life in writing this book,” Brinkley said. “Writing about Henry Luce drew me not just into Luce himself, but also into the character of his famous magazines.”

Though a historian by trade, Brinkley is no stranger to the field of journalism. Son of broadcast journalism pioneer David Brinkley, the Columbia professor said that his personal connection to journalism was instrumental in his work on Luce.

“It is not purely coincidence that I chose a journalist for this biography, since my father, my mother and both my brothers have been journalists,” Brinkley said.

The Sperber Prize is awarded annually to the biographer of a distinguished journalist or media figure. The award recognizes a work that meets the high standards set by the prize’s namesake, Ann Sperber, who wrote the Pulitzer-nominated biography Murrow: His Life and Times (Fordham University Press, 1998).

The award was established in 1999 with a gift from Liselotte Sperber in memory of her daughter.