skip to main content
Return to Fordham University
You are at:Home»Inside Fordham»Bill Moyers and the “L Word”: Go Right Ahead

To those who might attack him as a “liberal” journalist, Bill Moyers has a taut response: Go right ahead. The longtime television reporter said that it isn’t a pleasure to be attacked by ideologues like Bill O’Reilly and Ann Coulter, but “what they call liberalism, I call good reporting.” 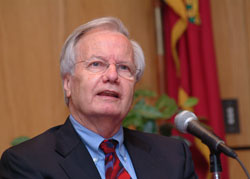 Bill Moyers: We let people get away with an Orwellian perversity, where words mean whatever the state wants them to mean.
Photo by Chris Taggart

Moyers was at Fordham’s McNally Amphitheatre on Sept. 25 to participate in a panel discussion moderated by Everette Dennis, Ph.D., Felix Larkin Professor of Communications and area chair, Graduate School of Business Administration. Moyers was also interviewed by Bill Small, former dean of Fordham Graduate School of Business Administration and chairman of the News & Documentary Emmy Awards and Av Westin, executive director of the Foundation of the National Television Academy.

Moyers, 72, said the current conservative trend toward controlling information was something he had witnessed during the Nixon administration. More recently, Moyers’ program Now was the focal point for the attack on the alleged leftward bias of Public Broadcast Television in 2005, during which the Bush-appointed director of PBS spent $10,000 investigating the show.

“It’s part of a larger strategy to go after everyone who reports the facts,” Moyers said. “Conservatives and right wingers embrace a worldview that admits no facts to the contrary of what they believe.”

Moyers was critical of what he defined as the current administration’s usurpation of language. “We let people get away with an Orwellian perversity, where words mean whatever the state wants them to mean,” he said. “That’s the big hoodwink.”

Moyers blamed the public for being part of the hoodwink, noting that Americans tend to use media sources to reinforce their own opinions. He called this phenomenon the “siloing” of media. “Pat Robertson and others encourage their followers to get their information from venues that confirm their worldview—the Foxes, CNN’s, pulp radio,” he said.

The journalist drew laughs when he called late President Lyndon Johnson “13 of the most interesting people I’ve met,” for his fellow Texan’s chameleon-like persona. Moyers worked as press secretary for Johnson from 1965 to 1967.

Moyers, whose own reporting career began at the tender age of 16, spoke somewhat cautiously in defense of new reporting technologies. “I believe the more voices the better,” he said. “(But) with the blogosphere…the demise of editors is dangerous.” The editor’s role, he emphasized, is to check sources and confirm facts.

Moyers said that the Internet age is not the only one in which the news media has grown exponentially. “Between Thomas Jefferson and the Civil War, there were more than 1,000 independent newspapers in the United States,” he remarked. “It was a feisty time in American democracy.”

“The kind of news we need to keep our freedom is not the kind of news we are getting,” Moyers said. The audience has an important role in raising the bar in terms of quality, and demanding facts, and “the reward is freedom.”