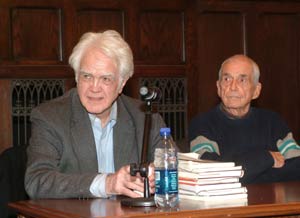 James Marsh, Ph.D., professor emeritus of philosophy, and Daniel Berrigan, S.J., said that it is a university’s obligation during a time of war to discuss the issue with students.
Photo by Chris Taggart

On an election evening that some political analysts viewed as a referendum on the American invasion of Iraq, longtime antiwar activists Daniel Berrigan, S.J., and James Marsh, Ph.D., professor emeritus of philosophy at Fordham, spoke to students in Duane Library about the historically uneasy relationships among faith, academia and secular power.

Father Berrigan’s recurring theme was of the “two churches.” He said that “the religion that goes with empire, goes down with empire,” and dismissed the notion of a just war.

Responding to a question about the current administration’s frequent use of faith-based pretexts for action, Marsh asked, “What does George Bush’s version of Christianity have to do with real Christianity?”

Father Berrigan answered that there is a long lineage of kings and princes who have called upon the “gods of war” to justify earthly gains. “Solomon took 13 years building God a temple…[that was]a pure projection of his bloody plans,” he said.

Father Berrigan was also critical of the Fordham faculty. “I felt I had a serious obligation to students in time of war. We need to break the noose of silence about war around the faculty… it’s awful that people allow war to become normal,” he said.

Marsh affirmed this sentiment, noting that in his classes in 2001 much time was spent discussing the war—an event he said was as important to the current generation as the assassination of President John F. Kennedy was to previous generations.

Father Berrigan said he finds the “real church” and “real America” in humble places, through works of mercy and justice, and in places like Jonah House (which his brother, the late Phillip Berrigan, founded), and the Jesuit community on Manhattan’s West Side, where Father Berrigan still resides.

“The real America is in the streets, not in the suites,” as Marsh put it.