skip to main content
Return to Fordham University
You are at:Home»Inside Fordham»Behind the Veil of the Poet: Elizabeth Bishop and Poets Out Loud 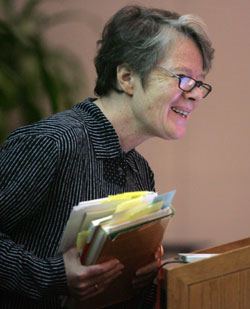 The Pulitzer Prize-winning poet Elizabeth Bishop set a very high bar for herself in her published work, but a collection of unpublished personal fragments and notebooks offers a rare glimpse into the life and compositional mind of the great poet, according to Alice Quinn, poetry editor of the New Yorker and editor of a new book featuring works from Bishop’s donated papers.

“It’s a very humbling experience to see the seeds of work abandoned,” Quinn said at Fordham’s Poets Out Loud reading on Sept. 18 at the Lowenstein Center. “Even in unfinished form they make me realize what a victory her life was both as an artist and a person.”

Quinn gave a reading from her new collection,Edgar Allan Poe & the Juke-Box: Uncollected Poems, Drafts, and Fragments (Farrar, Straus and Giroux, 2006), to a literary-minded audience who came to hear excerpts from the mildly controversial work. Quinn showed the audience several of the handwritten passages from the approximately 3,500 pages of Bishop’s raw material archived in the library at Vassar College, where the poet studied in the 1930s. Quinn used the visuals to shed light on Bishop’s love life, her literary brilliance at an early age, her fight with alcoholism and her melancholy childhood. Much of the collection, Quinn said, was not stamped for publication—a touchy footnote that made choosing how to tactfully present the 120 draft poems and fragments a daunting task.

“She was such a perfectionist,” Quinn said of Bishop, who was known to take years composing a single poem. “I had to do something with the unfinished material other than just hang it out on a clothesline.”

Bishop, who died in 1979, met modern American poet Marianne Moore at Vassar, and later became her protégé. She also spent many years outside the United States, including a residency in Europe and 18 years in Brazil, and received the Pulitzer Prize in 1955 for two of her combined works, North & South and A Cold Spring.

Elisabeth Frost, Ph.D., associate professor of English and director of Poets Out Loud, said that this first reading of the series turned out to be serendipitous in its use of technology to deliver the presentation.

“Alice Quinn’s book itself was the inspiration for this reading, but I’ve wanted to present visual images along with poetry for some time,” Frost said. “With poetry, the spoken word is the core of the expression but at the same time I know how hard it is to absorb poetry through the ear only.”

Poet Emily Fragos introduced Quinn after reciting some works from her own anthologies and three longer Bishop poems. Fragos said that Fordham’s Poets Out Loud series, established in 1992, had become “one of the top venues for reading and sharing poems in New York City.”

Poets Out Loud will sponsor one more reading on Dec. 4, featuring the work of Patricia Spear Jones and Matthew Zapruder.