skip to main content
Return to Fordham University
You are at:Home»Inside Fordham»Bats Have New Roost at Calder Center 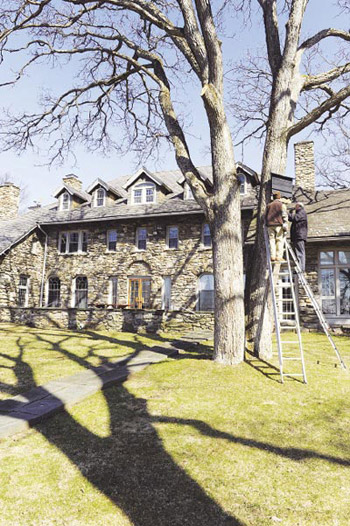 Less than a year after the Louis Calder Center biological field station celebrated the opening of a new residence hall, a much smaller endeavor was unveiled for residents of the winged variety.

On a clear and cool day in early March, two custom-made wooden bat houses, each about the size of a mail box, were installed on the sides of trees near the center, 20 feet up from the ground.

The idea for the houses came from Marco Valera, vice president for Facilities, as a way to use the Calder Center’s rural grounds to expand bats’ habitats. As it turns out, the structures will also help Craig L. Frank, Ph.D., associate professor of biological sciences.

Frank, co-director of the Fordham University Environmental Science program, is trying to determine why all but one of the six species of bats that live year-round in New York State are dying off from the effects of the fungus Geomyces Destructans, otherwise known as “white nose syndrome.”

“Bats are unique in that they use ‘daily torpor’ at one part of the year, and then they’ll use hibernation in another part of the year. During the latter months of the summer, they go torpid when they’re day roosting, which means they’ll drop their metabolic rate and body temperature well below basal levels to preserve energy levels,” he said. 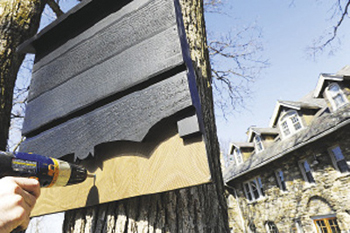 The custom-made houses will serve as a place for bats to roost during the day.
Photo by Chris Taggart

The bat houses, said Frank, will offer a suitable place for daily roosting and daily torpor.

“They tend to go under tree bark, up high, and into crevices,” he said, “but a couple of species of bats have figured out that buildings are a great place to use for daily torpor. So they’ll go into an attic, fly out at dusk, and fly back at dawn.”

For reasons that are not understood, Geomyces Destructans causes little brown bats to deplete their body fat reserves before spring, effectively starving them to death. The large brown bat, however, is unaffected by the fungus—which is why Frank predicts that in 20 years, it will be the lone bat species living in this area.

Using radio transmitters half the weight of a paper clip, Frank has been monitoring 16 bats as they hibernate. Using radio telemetry, he has been able to remotely follow the bats 24 hours a day, seven days a week, and record each bat’s body temperature every 15 minutes.

Frank’s research findings will be published as “The Relationship Between White Nose Syndrome and Dietary PUFA Levels in Bats,” and will appear as a chapter in Living in A Seasonal World (Springer, 2012)

With the new bat houses, Frank hopes to monitor whatever types of bats move in, in much the same way as he did through hibernation.