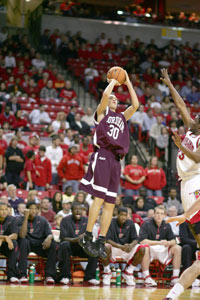 The Rams kept their home winning streak intact, defeating Iona, Fairfield and Quinnipiac in the Rose Hill Gym to stretch the streak to seven games, dating back to last season. Fordham also picked up a big win on the road at Penn, defeating the Quakers, 77-60 at The Palestra, behind 21 points and eight rebounds from Bryant Dunston. Dunston became the 31st Fordham player to reach the 1,000-point plateau when he scored late in the game against Manhattan, a game in which Marcus Stoutcontributed 17 points, seven rebounds and seven assists.

The men’s basketball squad also played some tough road games in December, falling to Maryland, who was ranked 22nd in the country at the time, and Texas A&M, ranked 13th at the time.

Women’s Basketball
Despite playing with a depleted roster, the Fordham women’s basketball squad picked up two wins at year’s end, defeating Manhattan College in the annual “Battle of the Bronx,” and Yale. In the Yale game, senior Lisa Carrolnetted 39 points, the second-highest total in Fordham women’s basketball history, joining Cecilia Wanker, who netted 39 points against New York Tech on Feb. 10, 1982. J.J. Radice is the only Fordham women’s player to score 40 points in a game. For her exploits, Carrol was named Atlantic 10 Player of the Week.

Football
The accolades keep coming in for the football Rams as senior linebacker Marcus Taylor was named Third Team All-America by The Sports Network and junior punter Benjamin Dato was named Third Team Associated Press All-America. Taylor, the 2006 Patriot League Defensive Player of the Year, led the team and was 11th in the NCAA I-AA in tackles with 116, while Dato, who earned First Team All-Patriot League honors, led the league and was third in the NCAA I-AA in punting average (44.6 yards/punt).

The men’s squash team picked up its first win of the year with a 9-0 victory over Bard College in the Lombardi Center on Dec 2.

Swimming
The Fordham men’s and women’s swimming squads closed out the 2006 portion of their schedule at the Nutmeg Invitational at Yale on Dec. 2 and 3. Winning events for the Rams were freshmen Nicole Marshall (200 IM) and Caitlin Napoli (200 fly) along with sophomore Ashley Ukleja (1650 free). In the relay events, Kristin Colton, Marshall, Napoli and Tressa Dunn took home the gold in the women’s 400 medley relay and the 800 freestyle relay.

For her accomplishments, Marshall was named the Atlantic 10 Rookie of the Week following the Nutmeg Invitational.

Indoor Track and Field
The Fordham men’s and women’s indoor track and field squads opened the 2006-07 season by hosting the Fordham Opener on Dec. 1 and the Christmas Classic on Dec. 8.

In the Opener, the Rams had five event winners in both the men’s and women’s competition. Of the winners, junior Brian Mulkeen highlighted the night by winning the weight throw event with an IC4A qualifying throw of 57 3/4 feet.

In the Christmas Classic, the Rams had 12 event victories, led by senior Kerstin Greene, who won three individual events, taking the triple jump with a school record and ECAC qualifying mark of 39′ 4″, the high jump, and the 60 meters hurdles as she was named Atlantic 10 Performer of the Week.

Remember to check out all the schedules, scores and highlights at www.fordhamsports.com.